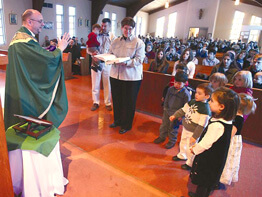 St. James in Boonsboro is a little faith community with big dreams.

After spending most of its 139-year history as a mission of other churches in the region, the growing Washington County church is taking steps many hope will lead to full-fledged parish status.

Fueled by a housing boom in the region that pastoral leaders say could nearly double the church registry to about 700 families or more within a decade, St. James has recently begun renting a house across the street from the church to provide a parish office and space for religious education and diaconal ministry. It’s the first time St. James has had its own office space.

Father Stephen E. Hook, administrator, said there is a sense of excitement among churchgoers who have longed for parish status. St. James is currently a mission affiliated with St. Augustine in Williamsport. Father Hook is the pastoral leader of both communities, maintaining his residence at St. Augustine.

“They are very supportive of their community and they are very faith-filled people,” said Father Hook, noting that Bishop W. Francis Malooly, western vicar, was on hand to bless the new office space on Jan. 7.

“They are really stepping up to the plate and making things happen,” the priest said. “There’s a lot of positive energy.”

In the first half of the current fiscal year, St. James’ collection is up 15 percent, according to Father Hook – a sign of growing support.

The administrator emphasized that it will take time and approval from Cardinal William H. Keeler before St. James could become its own parish, but Catholics in the region seem committed to making their dream a reality.

St. James has had moments of sadness in its past, Father Hook said. Always a small community that sometimes closed for stretches at a time as population dwindled, a low point came in 1969 when the original church was condemned, he said. After discovering that the church’s walls had starting bowing outward, archdiocesan officials had the structure torn down right before the 100th anniversary of the faith community’s founding. A new church was later built along North Main Street.

Part of the anticipated growth of Boonsboro comes as the town annexes additional land, Father Hook said. About 1,800 additional housing units are expected to be erected in the next five years.

“25-30 percent of those new families will be Catholic,” Father Hook said.

Because the current church only seats 220 people, there will be a need to expand the existing facility or build a larger church. The priest shortage makes it impossible to simply add more Masses to accommodate the growing numbers, said Father Hook, adding that St. James owns 18 acres of land just outside Boonsboro where a new church could be built.

Suzie Lushbaugh, a member of the pastoral council, called it “fantastic” to see the growth of the church she has called home for more than two decades. There are currently 340 registered families – up from 225 in 2001, according to Father Hook.

“We’re getting a lot of new, younger members who are very interested and very active in the parish,” said Ms. Lushbaugh.

The newly added office space allows St. James to offer programs that previously could only be accessed at other parishes in the region, she said. The facility also frees up space in the church hall for more social functions.

Father Hook plans to launch an initiative called “Vision 140” in honor of St. James’ upcoming 140th anniversary. The program will look at the faith community’s past and promote discussion about its future, he said.

“It will be a point of focus on where we want to go,” he said. “There’s a lot of good potential here at St. James.”