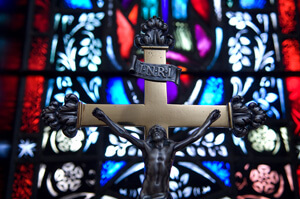 The story of Our Lady of the Angels Chapel begins in 1848 with the opening of St. Charles College in Ellicott City.

And the story of how a coffee-table book about the chapel came to realization began with a photographer who had never been in the chapel and wanted to capture it in photos.

“I thought they were great,” said Sulpician Father Leo Larrivee, pastor for the last 15 years, of the photos with Jim Stratton’s behind-the-lens perspective.

Mr. Stratton asked the priest if he had ever written a book about the chapel, a question often asked by residents in Charlestown Retirement Community, which was formerly St. Charles College. Father Larrivee, 58, was a student at St. Charles between 1969 and 1973.

“The chapel is so filled with rich detail,” said Mr. Stratton, a part-time photographer and full-time engineer who designs and builds spacecraft. “We easily could have put together enough content to fill two or three books!”

While the full-color, 80-page book is designed using Mr. Stratton’s photography, the historical text was written by Father Larrivee.

“Much of the information I had in my head,” the priest said. He researched the remainder through a historical magazine called The Borromean, of which he had a complete set, which was published by the college.

The book, “Our Lady of the Angels: A Celebration in Color and Light,” discusses the chapel and its history, and it includes information about the seminary, as well as the original one in Ellicott City.

The project is a fundraiser for maintaining the Our Lady of the Angels Chapel. Since 5,000 copies came off the press around New Year’s Eve, 700 have been sold at $20 each.

The book has received “overwhelming” accolades from readers, according to Mr. Stratton.

“More than anything I hope this inspires more people to come out to experience the beauty of the chapel in person,” said the photographer, who said it was a pleasure to work on the project. “You really do have to see it to appreciate its craftsmanship and care.”

Will Father Larrivee tackle another book?

To view images of Our Lady of the Angels, visit www.jimstrattonphotography.com.