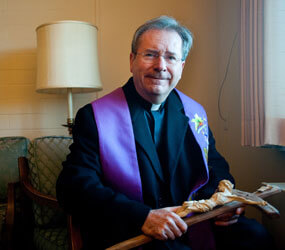 WASHINGTON – Rare is the priest in the United States who holds the title of diocesan exorcist.

Rarer still is the priest who is the focus of a book on his training as an exorcist, not to mention that the book has inspired the making of a feature film called “The Rite” – starring Anthony Hopkins, no less.

But that’s all become part of the life of Father Gary Thomas, a priest of the Diocese of San Jose, Calif., who is pastor of Sacred Heart Church in Saratoga, Calif.

When some of his fellow priests were discussing that another priest had declined an offer from the bishop to serve as diocesan exorcist, he thought to himself, “I could do that.”

Not that it was easy, Father Thomas said. For one thing, he could find no U.S.-based course of study for priests to be trained as exorcists. He wound up taking a three-and-a-half-month sabbatical to go the Rome seminary of the Legionnaires of Christ and get training from a priest based there.

His experiences are recounted in the 2009 book “The Rite: The Making of a Modern Exorcist” by Matt Baglio.

But Hollywood being Hollywood, when reality isn’t good enough for the big screen, it invents a new reality. “In the movie, I don’t start out as a priest. I start out as a seminarian who has a faith crisis,” Father Thomas said in an Oct. 18 telephone interview with Catholic News Service. “I am ordained eventually before the end of the movie. In the book, already I’m already a priest and I’m not having a faith crisis.”

Hopkins plays a priest-mentor to the seminarian, who anchors the story.

With no U.S. training available, Father Thomas studied three days a week during his sabbatical. “Partially, I made up my own curriculum,” he said. “There’s no cookbook for this stuff.”

A priest for 27 years, Father Thomas has been San Jose’s exorcist for the past four years. In that time, he said, he has conducted exorcisms on five people.

The results, he acknowledged, are mixed.

“One is ongoing and has been successful, but has not been completely delivered,” Father Thomas told CNS. “Two decided not to continue after a time because they lost patience. And the other two, the persons are dramatically better.”

But those are just the five whose cases he’s taken. “I get calls from all over the United States and e-mails, and I try to direct them to their own local church. It’s difficult to diagnose these things over the phone,” Father Thomas said.

“Every person who approaches you has a different story. You have to be able to discern out what they’re bringing is psychological matter or a preternatural mater or a combination of both – or neither, none of the above. Quite honestly, no two situations are identical.”

Exorcism, he added, is the last step. He said he was uttered a “prayer of deliverance” over some people who fear they’ve been possessed.

Father Thomas said he served as a consultant on the set of “The Rite,” with an anticipated released date of Jan. 28.

“I’m very excited about the release of this movie,” he said. “I think the move is very authentic about the topic. I was very impressed with Anthony Hopkins and Colin O’Donoghue (who plays the seminarian) and their portrayal of the ministry of exorcism as accurate … as was the scene that specifically involved exorcism.”

Mark Tuohy, a co-producer of “The Rite,” said of Father Thomas, “I think he’s a great guy.”

Father Thomas said he is certain that demonic possession exists. He noted that one theme in common with his five exorcism clients is “they had opened doorways to the demonic, either through witchcraft or going to witch doctors or other people having gone to witch doctors on their behalf.”

Asked about the case of Republican U.S. Senate aspirant Christine O’Donnell of Delaware, and her comment that she had “dabbled into witchcraft” in high school, Father Thomas replied, “I find that incredibly troubling that a person who had taken part in witchcraft would run” for office.

O’Donnell made the comment in an appearance on a 1999 television show. The segment had never aired until the host of the show, Bill Maher, aired it during the election campaign.

“I think that immediately disqualifies her from public office (as it would for) anybody who engages in witchcraft or engages in any new age activities,” the priest said. “It opens doorways to the diabolical. I think it impairs people’s judgments.

“There’s a difference between witchcraft,” Father Thomas said, “and somebody who goes and has their palm read.”

In interviews, O’Donnell has attributed her experimentation with witchcraft to being a teenager. Raised in a Catholic family, she describes herself as an evangelical Christian.

With no American training for exorcists available, Father Thomas said he has given orientation sessions to other priests. “But spending a day and a half with me is nothing compared to the three and a half months I spent in Rome,” he added.

The U.S. bishops and priests, including diocesan exorcists, are scheduled to meet Nov. 12-13 at a closed-door conference, prior to the annual fall general meeting of the U.S. Conference of Catholic Bishops Nov. 15-18.

“I’ve been pushing that (training) at the local seminary without success,” Father Thomas said. “We hope something will emerge (in Baltimore), but we have nothing at the present.”