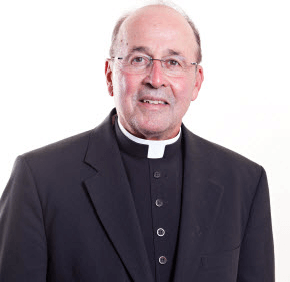 More than six years after Monsignor Arthur Valenzano underwent a life-saving bone-marrow transplant, the rector of the Basilica of the National Shrine of the Assumption of the Blessed Virgin Mary in Baltimore needs a second one to treat acute myeloid leukemia.

“It’s been a long haul since 2006, with a lot of ups and downs,” Monsignor Valenzano said. “I struggle to find the right words to say how much I appreciate the support from family, friends, priests, parishioners, doctors and total strangers. It makes me appreciate every day.”

Catholic leaders have organized a bone-marrow drive scheduled for Jan. 26 from 10 a.m. to 2 p.m. at St. Mary’s Seminary in Roland Park to help find a suitable match for a transplant.

However, Monsignor Valenzano told the Catholic Review that he has some promising potential matches after earlier ones did not work out. Once a good matching donor is confirmed, the priest said he will begin preparatory chemotherapy and radiation treatments within two weeks.

Monsignor Valenzano said the bone-marrow drive at St. Mary’s will provide a “wonderful opportunity” for possible matches to be made to help people in need of transplants around the world.

“The drive isn’t about me,” he said. “It’s about raising a level of consciousness that you can help a person get well by donating bone marrow.”

Those in good health between the ages of 18 and 44 are eligible to donate. Older, healthy invididuals through the age of 60 may be on the registry, but according to the National Marrow Donor Program, more than 90 percent of the time, doctors choose registry members ages 18-44 because research shows that cells from younger donors lead to more successful transplants. During the drive, participants will have the inside of their cheeks swabbed to see if they genetically match those awaiting a transplant. The information will be stored on a registry known as “Be the Match,” and participants will be contacted if there are any matches. They can then determine whether they want to go forward with a bone marrow donation.

Those unable to attend the drive, but who would like to join the registry are encouraged to do so at bethematch.com. A cheek swab kit will be sent to them with instructions on how to use it.

Archbishop William E. Lori, who lives with Monsignor Valenzano at the basilica residence, called his friend “one of the most wonderful priests I’ve ever encountered in my life.”

“I’m confident there’s going to be a great outpouring because he has touched so many lives – not only of parishioners, but also of his brother priests – with the light and truth and joy of Christ,” Archbishop Lori said. “I pray that these efforts will meet with the greatest of success.”

Because his immune system will be compromised once he begins chemotherapy and radiation, Monsignor Valenzano said he will have to avoid crowds and will be unable to celebrate public Masses. He intends to remain in residence at the basilica.

Michael Ruck, chairman of the Basilica of the Assumption Historic Trust, said parishioners pray for Monsignor Valenzano every day.

“We are all praying that monsignor will find a suitable match so that he can recover and continue his ministry to the basilica and the archdiocese,” Ruck said. “He’s just a great man.”

For information about the bone-marrow drive, call 410-727-3565 x220 or email kwandishin@baltimorebasilica.org