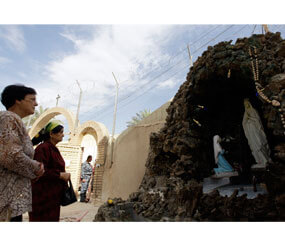 VATICAN CITY – A bomb exploded outside Sacred Heart Church in Baghdad April 24 after the Easter Masses had finished and parishioners had gone home.

The blast injured at least four people – two police officers patrolling the street outside the church and two civilians walking by, according to news reports.

Chaldean Auxiliary Bishop Shlemon Warduni of Baghdad told Vatican Radio that Catholics in Iraq are trying to unite their sufferings with the suffering of Christ on the cross so that their country eventually experiences resurrection.

“So, our hope is fortified because we are placing everything in the hands of the Lord,” Bishop Warduni told Vatican Radio after the bomb exploded.

“We pray that the crucified Lord would unite all people, that the risen Lord would give us the grace to live the joy of the resurrection,” he said.

“We have hope that the Lord will be with us always,” the bishop said. Iraqi Catholics want to be able to tell others: “See how much God loves everyone and is always with us,” he said.