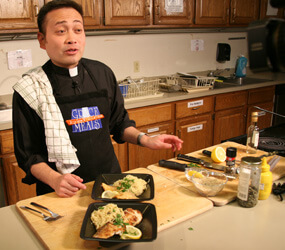 Father Leo Patalinghug is not the kind of guy who steps down from a challenge. The 39-year-old priest is a former national full-contact stick fighting champion, a black belt in tae kwon do and an 80s break dancer who can still bust the moves with the best of them.

So when Bobby Flay, a world-class celebrity chef, recently showed up in Frederick County and challenged the well-known “cooking priest” to a “throwdown” on the Food Network, Father Patalinghug’s response was simple: bring it on.

The challenge came in the form of an ambush.

Father Patalinghug, director of pastoral field education at Mount St. Mary’s Seminary in Emmitsburg, had been invited to film a cooking segment for the Food Network based on “Grace Before Meals,” his popular cooking show that airs on the Internet and a Boston-based Catholic television station.

While Father Patalinghug was preparing a steak “fusion fajita” during a June 8 taping at the seminary, he noticed that his 100-member audience started “rustling around” and got unusually excited while he was talking about ginger and the dry ingredients for his marinade.

“I glanced up and the producer pointed to Bobby Flay,” said Father Patalinghug, a self-described “huge fan” of Flay and his fusion style of cooking.

“There he was standing with his arms crossed and nodding approvingly,” the priest said. “It shocked me and I said something like, “Oh good Jesus! What the heaven are you doing here?’”

The master chef threw down the cooking challenge to see who could produce the best fajita.

“It was so surreal,” Father Patalinghug said with a laugh. “I think my hands were shaking – which was bad because I had to cut onions next. I said something like, ‘With God as my witness, I’m not afraid of you!’”

Standing side-by-side, the two chefs went to work on their dishes as a team of cameras filmed their every move. A panel of judges evaluated their work and will announce the winner when the episode of “Throwdown! with Bobby Flay” airs on the Food Network at 9 p.m. on Sept. 9.

Father Patalinghug isn’t allowed to talk much about what happened during the competition or how he prepared his dish. But the priest said his fajita draws on a wide range of cultural influences including those of the Philippines, where he was born.

“The marinade has a smoky component, a sweet component and a spicy component,” said Father Patalinghug, who first learned to cook from his mother and other family members while growing up in Baltimore. The former parishioner of St. Rose of Lima in Brooklyn got further hooked on the culinary arts when he cooked for his fellow seminarians while studying at the Pontifical North American College in Rome.

“For the fusion fajita, I drew on every country I’ve ever been to,” he said. “I don’t think my recipe was anywhere near as complicated as Bobby Flay’s. He’s the Iron Chef going against little old me.”

During part of the taping, Father Patalinghug held his rosary – “a force of habit,” he said. The priest noticed that others in the audience did the same. They prayed as he cooked.

“Bobby Flay looked over and said, ‘Oh no! They pulled out the beads. I’m done,’” Father Patalinghug said.

Grace Before Meals has become a sensation on the Internet. During each “Webisode,” Father Patalinghug visits a family, prepares a meal and engages in meaningful discussions. A cookbook by the same name has sold more than 10,000 copies. Father Patalinghug hopes sponsors will soon step forward so the program can air nationally on PBS.

“A regular family meal can become a real moment of God’s grace – not just because of the prayer that’s said before the meal, but also by the interaction between people who love one another,” the priest said.

Father Patalinghug hopes his program will inspire families to spend their dinners together. He also is convinced food can unite people of different cultures.

“I honestly think if we got together more around a dinner table, we’d break down stereotypes,” he said.

As for the competition with Flay, Father Patalinghug noted that the word “competition” literally means “with petition.”

“That means ‘prayer’ for us,” he said. “I was really grateful that by providence, the whole idea of competition became a prayer. With prayer, anything is possible with God.”

Father Patalinghug will host a block party outside Di Mimmo’s in Little Italy on Sept. 9 for the premiere of his appearance on the Food Network. More than 500 people are expected to watch the program with him.