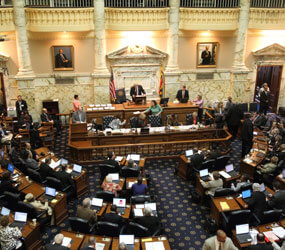 As confetti rained down on lawmakers to mark the April 12 close of the legislative session in Annapolis, advocates for Maryland’s Catholic bishops were not celebrating.

The state business tax credit they had championed for years, which would have helped students and teachers in nonpublic and public schools, was defeated in a House of Delegates’ committee on the last day of the session. It was a bitter loss in a year when the bill won the public support of Gov. Martin J. O’Malley and passed in the State Senate in a 30-17 vote.

Archbishop Edwin F. O’Brien, who had testified in Annapolis in support of BOAST, called the vote a “sad triumph of special interests over the needs of low-income students” and a “heartless disservice to the 55,000 students in Maryland’s Catholic schools, their teachers and their families.”

“One of the most frustrating parts of the final vote was watching members of the committee who had claimed to be supportive vote against it,” she said.

Other key measures supported by the MCC also were defeated earlier in the session. A bill that would have provided pregnant women the option of seeing a sonogram before having an abortion did not pass, nor did a measure to fund adult stem cell research for sickle cell disease.

The MCC had some important successes. Lawmakers approved $4.4 million in funding for textbooks and technology in nonpublic schools. They largely spared social safety-net programs from budget cuts.

Proposals to legalize same-sex marriage and lift some restrictions on the death penalty, which the MCC strongly opposed, were defeated.

The downfall of the BOAST bill, a measure which gained a sense of urgency after the Archdiocese of Baltimore announced the consolidation of 13 schools, was a stinging setback as nonpublic schools face increased challenges with finances and declining enrollment.

Russell expressed deep frustration with the House Ways and Means Committee, which defeated BOAST on a 14-7 vote. An education subcommittee had made a late attempt to gut the bill with amendments that would have had the effect of completely eliminating students at the state’s Jewish schools from receiving benefits.

The amendments would have ditched the business tax credit in favor of a grant program totaling as much as $10 million a year to nonpublic schools that have operated at the same site for at least 25 years and have had enrollment declines of at least 10 percent over five years. Jewish schools would not qualify under those proposals.

“It’s clear that many members of the committee don’t like the BOAST proposal, thanks to the fact that they are very beholden to a very powerful (teachers) union lobby,” Russell said. “Some are unfortunately motivated by a very unfair animosity toward the private school community.”

“I am extremely disappointed in the elected officials who worked against this proposal,” Archbishop O’Brien said, “and who showed a total lack of sensitivity to the needs of the families our schools serve and the impact that a quality education can have on the life off an at-risk child.”

Russell said the education sub-committee did not consult the bill’s supporters when introducing last-minute amendments that were “clearly designed to kill the bill.” The proposed amendments were not distributed until late on April 10, two days before the session ended.

“The Ways and Means Committee has had this bill before it for three years,” said Russell, noting that lawmakers knew that it was unconstitutional to propose amendments that give direct benefit to private entities. “It’s hard to believe this is a good faith effort.”

Russell said lawmakers were “playing games” with the bill to stall it and defeat it.

On other fronts, Russell was pleased to see the Legislature pass bills that broadened protections against child sexual abuse. They included measures to expand criminal background checks for those working at recreation centers operated by private entities that primarily serve minors, a bill to provide better information about sex offenders’ residency and the establishment of child advocacy centers throughout the state.

While Nancy Paltell, MCC associate director for respect for life, was disappointed in the defeat of the sickle cell proposal, she was encouraged that Baltimore City Del. Peter A. Hammen, chair of the House of Delegates Health and Government Operations Committee, promised to meet with her to talk about other ways of providing support for adult stem cell research for sickle cell disease.

“The opposition said we shouldn’t be focused on only one type of disease,” Paltell said. “That’s a bogus argument. This research is getting results. Let’s fund the kinds of research that is actually working.”

Paltell noted that Maryland has already spent $56 million on embryonic stem cell research that has brought no cures.

Julie Varner, MCC associate director for social concerns, said lawmakers showed sensitivity to the needs of the poor and did not succumb to the temptation of gutting social service programs.

“Poverty advocates did a good job making clear to legislators the difficult situation that most of the programs that help the poor were already experiencing,” Varner said.

BOAST remains on the MCC’s agenda’s for the next session.