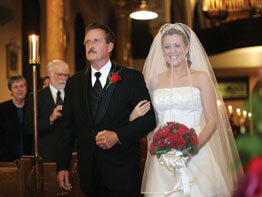 Walking arm-in-arm with her father up the aisle of Sacred Heart of Jesus, Highlandtown, Megan Fuller’s face was veiled with the traditional white “blusher.” Upon reaching the altar in the dim evening light, Larry Fuller ceremoniously lifted the veil and placed it gingerly behind his daughter’s head before sharing a kiss and hug, and offering her to the groom.

“I would not have prepared for my wedding without my veil!” said the now Mrs. Adam Gardner. “For me, those few moments were a very sincere rite of passage with as much emotional meaning as sharing marriage vows with my groom. It marked the strength of the trust between my father and me.”

Except for her sister, Mrs. Gardner said none of the 10-plus brides she has known wore a veil at all, let alone over their faces. “Perhaps it is a ‘religious’ feeling for them, and most are not Catholic. I am not sure why that tradition has faded, but for a girl so close to her father, as I am, it meant a great deal to me to wear the veil.”

Some date the veil to Roman times, when a bride wore a veil over her face to protect her identity from evil spirits. Others believe the veil comes from the Bible, which has references to the accessory.

In his experience officiating at weddings, Monsignor Joseph S. Lizor, pastor of St. Luke in Edgemere, said some brides wear veils over their faces before the vows and some do not – “maybe half and half.”

He has not seen a big decrease in their use over the years. About overall veil use, he said, “Most seem to use it. I do think it is a nice idea.”

A sales representative at Francesca’s Bridal in Nottingham said the store sells veils to an estimated 90 percent of their brides. Most brides buy them with their wedding dresses, sometimes influenced by religious backgrounds, said Brittany Ripple, who is a parishioner of St. Leo, Little Italy.

Francesca’s sells more veils than blushers, however, since not all women use this add-on piece, said Ms. Ripple. “A veil normally goes down the back; a blusher goes over the face, then flips over the bride’s head.”

In her October 2007 wedding ceremony, Mrs. Gardner used a cathedral-length veil and a blusher, connected to her veil with Velcro. The veil, which was longer than her train, did not hold a lot of meaning for her, she said. It was “just a part of my wedding costume,” which was removed promptly after the ceremony and photographs.

Wearing the blusher over her face was more symbolic.

“Because once Dad pulled back my veil and placed my hand in Adam’s and we ascended the steps of the altar … every moment of Meg Fuller was being written to an end,” said Mrs. Gardner. “Simultaneously I was becoming a wife … Meg Fuller did not disappear, she just became a new woman.

“The veil was a significant symbol of awakening to my new life and my new beginning.”