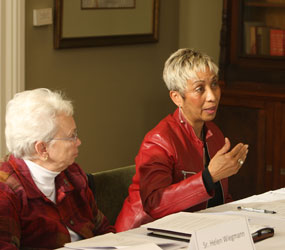 One year ago this month, Archbishop Edwin F. O’Brien stood in front of school and parish leaders to lay out stark numbers facing Catholic schools in the Archdiocese of Baltimore.

Fifteen elementary or high schools had closed since the 2001-02 school year; another four would cease operations by the summer of 2009. In those seven years, elementary enrollment had dropped from 24,381 students to less than 20,000. (By the fall of 2009, enrollment would drop another seven percent.) Parishes and schools were overwhelmed by financial deficits.

The status quo, Archbishop O’Brien said, had to end.

“The facts … suggest that we as an archdiocese must soon take energetic and painful steps to reconstitute our Catholic schools, elementary and secondary,” he said. “Our goal will be to make Catholic education as affordable and accessible to as many Catholic youngsters as possible, as well as to non-Catholics in some of our more impoverished communities.”

“When we put the group together,” Bramble said Feb. 16, “we knew they were very busy people and I wondered if they would they have the time for this.”

Archbishop O’Brien is poised to announce the consolidations of an unspecified number of schools during the first week of March. By June, the committee will deliver a strategic plan to the archbishop designed to revitalize archdiocesan schools.

The Catholic Review was granted off-the-record access to a Blue Ribbon Committee meeting in January, when men and women hammered out details on ideas once deemed unthinkable for Catholic schools.

The committee met once a month early on, but recently gathered twice within one week. Bramble said that attendance among the committee, which includes members such as Maryland superintendent of public schools Nancy Grasmick, has been near 80 percent.

“It’s been more than I expected,” Bramble said. “We have a lot of different skill sets, strong educational, financial, governmental, not-for-profit and political backgrounds. We’ve found that a lot of the issues in our Catholic schools are similar to the ones facing business and government.”

Mary Pat Seurkamp, president of the College of Notre Dame of Maryland and a product of Catholic schools, jumped at the chance to be part of the committee.

“It was important to me as much personally as it was professionally,” she said. “I feel very deeply and personally that there’s great value in these schools.”

The faith component, she said, “leads to a fuller, richer experience for these students.”

James Davis, co-chairman of the Hanover-based Allegis Group, a staffing firm, was raised in Philadelphia Catholic schools but had no connection to Catholic schools in the archdiocese. The values he learned through his own experience compelled him to join the committee.

“It’s amazingly eye-opening,” Davis said. “You know in a broad sense that there’s difficulty out there, but you don’t know the level or the specifics. The declines, year after year, are at a rapid pace. It’s not hard to understand. For typical families, it’s really just difficult to come up with the amount of money to pay tuition.”

“For the time being, there’s a good plan to put some renewed energy and focus in these schools for the foreseeable future and at least stem the tide,” Davis said.

Members admit they have had their differences of opinion.

“It has always been respectful and we’ve listened to each other’s viewpoints,” Seurkamp said. “With that kind of diversity of thinking, we’ve reached a better place. I believe any committee or taskforce should have those types of discussions.”

Bramble added: “Some of the discussions have been very intense. There isn’t always unanimity. People feel comfortable sharing their views. We still have a ways to go.”

“I’m sure the archbishop wishes he was in a position to not consider consolidations,” Bramble said. “It’s an unfortunate reality of where we are as a school system. It’s not going to be easy. I think the strategic plan hopefully will be an opportunity to stabilize the system and help it begin to grow again.”

After consolidations, Bramble does not foresee difficulty selling reconstituted schools to families.

“We have an outstanding product, one that has existed for hundreds of years,” he said. “Our parents have made it very clear that Catholicity and faith formation is important. I think there will be a tremendous marketing opportunity for us. It won’t take too much to turn this decline around. When we tell our story, we’ll find we can re-ignite our schools.”