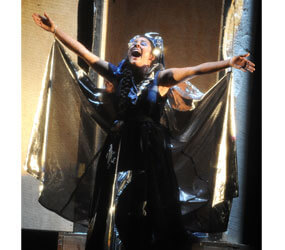 WASHINGTON – Jessica Bachicha’s debut last month as the Queen of the Night in Catholic University’s production of Mozart’s opera, “The Magic Flute,” required her not only to sing one of the most difficult arias the great composer ever wrote for a soprano, but to negotiate a stage set that included steps.

While many sopranos have tackled the role, what made Bachicha’s performance even more special was that she learned the complicated music and her way around the stage despite that fact that she is blind.

And, while most blind opera singers opt for recital performances – with its limited movement – Bachicha, a doctoral candidate in voice at the Catholic University of America, tackled the part of the evil queen with gusto.

To learn the role, she scanned the sheet music into a computer, sent it via e-mail to a friend who used a computer program to translate it into Braille, and then e-mailed it back to her. She then prints out the embossed Braille translation.

“I never thought of my blindness as a difficulty. When I was a kid, I climbed trees, climbed walls, got into trouble and did the things my sisters and cousin did,” Bachicha said. “I have never been angry about being blind, but I do get angry that people do not realized that this (blindness) is just another characteristic, like being tall or short, having blonde hair or brown.”

A native of New Mexico, Bachicha now lives in Baltimore, where she works at the National Federation of the Blind and is a member of St. Ignatius Parish. She commutes to Washington as she pursues her doctorate at CUA.

Bachicha earned degrees in foreign languages and music from the University of New Mexico. She studied in England and Italy and earned a master’s degree in performance from the New England Conservatory. She anticipates earning her doctorate next spring.

She said the fact that she is blind “sometimes helps, sometimes it doesn’t” in her musical career.

“Since it is a part of me, I really don’t know how I would be as an artist if I wasn’t blind,” she said. “It has been helpful in that the emotion that I portray when I sing is from how I would naturally portray that emotion, as opposed to imitating what others have done.”

Her blindness, she added, “has given me a lot of opportunities to grow in holiness. It will always bring you back to humility.”

Although she has a busy schedule, Bachicha said she tries to make time for daily Eucharistic Adoration.

Bachicha describes herself as a “revert” to the Catholic faith.

“Growing up, my dad said, ‘While you live under my roof, you will go to Mass,’ which was a good thing,” Bachicha said. “When I was a little older, I studied a lot of different faiths. I became interested in the Catholic faith again when I heard a priest who was rock solid in orthodoxy, and not afraid of the truth.”

She said her “revert” to the faith was complete when she attended World Youth Day in Denver in 1993. “There were people from all over the world saying the same prayers I was saying, so I thought there must be something to it,” she said. “I guess you could say I came to an intellectual realization of my faith.”

As a child, Bachicha wanted to be a judge, but, when she decided to pursue her performing career, she discovered that “music is the way I glorify God.”

“For years and years I asked Him, ‘Show me how to glorify you,’ ” she said. “I will only perform music that brings people closer to the glory of God and the glory of the faith. I would not audition for a show that is going to hurt souls rather than help them.”

Her role as Queen of the Night in “The Magic Flute” was an “evil one, but she gets vanquished in the end,” Bachicha noted.

Bachicha is working with a pianist and her brother Ben, an electric-guitar player, on a Christmas CD she hopes to release later this month. It is a combination of Christmas carols with meditations on Pope Benedict XVI’s 2007 encyclical “Spe Salvi” (On Christian Hope).

She said that she chooses to glorify God with her voice because “I have great voice teachers who have taught me great technique, but He (God) is my voice master and I always have to go back to that.”

Courtesy The Catholic Standard, the newspaper for the Archdiocese of Washington.