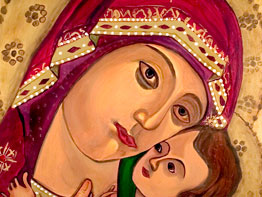 With Mother’s Day rapidly approaching, Father Leo Patalinghug believes it’s the perfect time to look to the Blessed Virgin Mary as the model for what motherhood is all about. Mary exemplifies the best qualities for raising children, he said, and she is a powerful intercessor for families looking for help rearing children.

“I think Mary shows that motherhood is one of the most important vocations because mothers help raise future societies,” said Father Patalinghug, an archdiocesan priest who specialized in Mariology while earning a licentiate at the Pontifical Institute Marianum in Rome. He also studied at the University of Dayton Marianum.

“That’s important because we live in an age when motherhood is looked down upon because it’s not a ‘career,’” he said.

Father Patalinghug, director of pastoral field education at Mount St. Mary’s Seminary in Emmitsburg, said Mary’s willingness to accept life is one of her paramount attributes. She is also the “pre-eminent teacher,” he said.

“The domestic church is the first of all schools,” Father Patalinghug explained. “So she obviously is an important person for all mothers as a reminder of being the first teachers.”

Because Mary was conceived without sin through the Immaculate Conception, Father Patalinghug said she can inspire all mothers to give their own children the strength to steer clear of sin.

“I don’t know if mothers realize they have a great responsibility with fathers to protect their children from evil,” he said. “We want to give cars and be friends and dress our kids in cutesy outfits – and that’s all perfectly fine. But we have to do more than that. We have to help them stand up to sin.”

During Christ’s passion and death, Mary was constantly at her son’s side, praying for him and supporting him, Father Patalinghug said.

“Her presence and her prayers helped her to be a sorrowful mother, which means a mother who has compassion,” he said.

Mary’s example is a reminder that children will inevitably undergo their own suffering – and that’s not a bad thing, he said.

“Often, we try to protect children from everything,” he said. “But that could stunt their maturity level. Mary, who was willing to protect Jesus, recognized that the cross carried with love is not evil. She knew it would be the source of salvation.”

Mary teaches mothers how to suffer well and how to be compassionate in the suffering of others, Father Patalinghug said.

To celebrate Mother’s Day, the priest said it’s a great idea to pray the rosary with mothers. Ask for Mary’s intercession, he said, and follow her in her complete devotion to Christ.

“Mary fed Jesus,” he said. “And one thing Mary does for us is feed her children now with the fruit of her womb, Jesus in the Holy Eucharist. That’s deep stuff, isn’t it?”