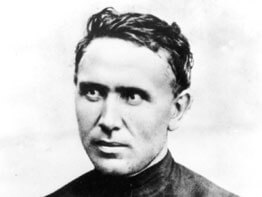 HONOLULU – The sainthood cause of Blessed Damien de Veuster took a significant step forward when the medical commission of the Vatican Congregation for Saints’ Causes ruled that the healing of a Hawaiian woman of lung cancer more than 10 years ago was “unexplainable according to available medical knowledge.”

The woman prayed to Blessed Damien and made pilgrimages to Kalaupapa, where he ministered and where in 1994 a portion of his remains were brought from his final resting place in Belgium.
According to Sacred Hearts Father Bruno Benati, the postulator of Blessed Damien’s cause, the five-physician commission’s Oct. 18 ruling was unanimous.

Father Benati made the announcement on the Web site of the Congregation of the Sacred Hearts Oct. 19, the day after he received a phone call from the secretary of the congregation informing him of the commission’s judgment.

The path to sainthood requires two confirmed miracles. The first qualifies the candidate for beatification; the second is needed for canonization.

Blessed Damien was a Belgian-born missionary priest who served Hansen’s disease patients on Molokai in Hawaii more than a century ago.

Through his heroic and saintly efforts, he transformed the settlement from a place of despair to a place of dignity. He died April 15, 1889, of leprosy.

For the beatification, the pope in 1992 approved the 1895 cure of a Sacred Hearts sister as a miracle attributed to the priest’s intercession.

Father Edward Popish, a Hawaiian Sacred Hearts priest who works as treasurer in his congregation’s general house in Rome, said the most immediate step is for the doctors to write up their report.

“The medical commission will have to publish an official document to be added to the official dossier of the cause,” he told the Hawaii Catholic Herald, Honolulu’s diocesan newspaper. “Then they will send the entire document to the commission of theologians for study.”

Father Popish said Oct. 21 that the theological commission had not yet scheduled a meeting to discuss the Blessed Damien case.

If the second commission ultimately determines it is a miracle that can be attributed to Blessed Damien, the priest said, its decision will also be written up and added to the dossier on him.

“This dossier of documents is then handed over to the cardinals and bishops, who read it and present it to the pope,” he said.

According to Sister of St. Francis Mary Laurence Hanley, director of the cause of Blessed Marianne Cope, the rest of the process could take a year or longer.

The cure in question was the disappearance of cancer, without treatment, from the lungs of a Honolulu woman. The case was first documented by Dr. Walter Y.M. Chang, the woman’s physician, in an article he wrote in the October 2000 issue of the Hawaii Medical Journal.

The doctor, who is not a Catholic, wrote that the “lung metastases disappeared with no therapy at all” over several months following prayers to Blessed Damien and pilgrimages to Kalaupapa by the patient.

Chang presented his findings to then-Honolulu Bishop Francis X. DiLorenzo, who established a tribunal to examine the claim.

The tribunal, which included doctors and canon lawyers among its members, completed its study April 16, 2003. It agreed that the healing was dramatic and defied medical explanation.

The tribunal’s report and evidence were sealed and hand-delivered later that month to the Congregation for Saints’ Causes by then-postulator Sacred Hearts Father Emilio Vega Garcia.

The Vatican congregation had the case opened for more than a year before sending it back to the diocese for further documentation and clarification. The diocesan tribunal reconvened in early 2005 to address the Vatican’s concerns.

The Vatican accepted the resubmitted work of the diocesan tribunal Dec. 2, 2005.

Hawaii’s other candidate for sainthood is Blessed Marianne Cope, Father Damien’s successor in Kalaupapa, who was beatified in 2005.

According to Sister Mary Laurence, there have been several claims of miracles credited to Blessed Marianne’s intercession. She said the stories are “very touching” and show that Blessed Marianne is “most active.”

But until they have an “airtight” case extraordinary enough to pass the rigors of a medical and theological examination, she said, the Sisters of St. Francis won’t make any case public.