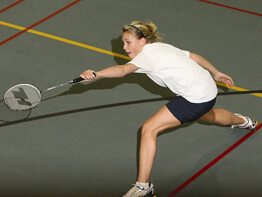 Back-to-back regular season champs, the Blazers, coached by Therese Maguire, are both aggressive on the court and focused on excellence as the program continues to grow at NDP.

With 25 girls on the varsity and junior varsity roster, the team is led by seniors who have seen much success over their four years.

Top singles player, senior captain Megan Heller posted a 13-3 record on the season and went 3-1 in the end-of-season tournament the week of May 1 at Garrison Forest School.

With a shining smile, Heller is all business on the court and looks to play badminton for Loyola College in Maryland, Baltimore, next season.

Intense, quick and highly skilled, senior Becky Matlack posted a 14-2 as No. 2 singles, and junior Carly Somerville mirrored the same record as No. 3 singles. Somerville made it into the tournament consolation round taking her St. Paul’s opponent to a full three games.

The top doubles team of seniors Natalie Abato and Becky Nevin were defending tourney champs going into this year’s round but were knocked out early in an unusual off-day for the dynamic duo who posted an 11-1 regular season record.

Maguire has high hopes for rising seniors, No. 2 doubles pair Sam Constantine and Kate Hershner. Coming into the end-of-season competition with a 14-1 record, Constantine and Hershner made it all the way to the finals before succumbing in three games to Friends School.

After 13 years on the scene at The Prep, Maguire is as diligent and positive as ever, seeing the program grow and seeing a solid core of players returning for the 2008 season.