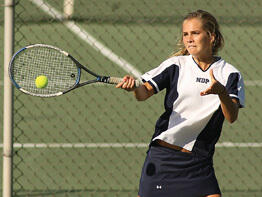 Lynn Taylor, head coach of the Notre Dame Preparatory, Towson, Blazers says that mental toughness is the key to one’s success in tennis, especially in the singles game.

That theory was right on the money Sept. 18 when No. 1 singles player, senior Frances Hutton handily defeated her McDonogh School opponent, 6-4, 6-1 to contribute to the Blazers’ 5-0 win over the Eagles.

“I really tried to stay focused and remain patient today,” said the senior, who is a four-year varsity player and has been the team’s top singles player for three of those years.

Head coach Lynn Taylor noted that Hutton, also a USTA tournament player, constantly uses spin on the ball and is one to play long points, often wearing her opponents down.

The Blazers’ No. 2 singles player is junior Kasey Harvey, who also got the win over her McDonogh opponent in two sets, 6-3, 6-4.

“Kasey wins by her heart,” said Taylor. “She is an incredible third-year varsity player, but in addition she’s tough as nails and she’s fast.”

Donned in sunglasses and pigtails, the Blazers’ No. 1 doubles team is made up of two experienced seniors, Katie Hershner and Caroline Kable. The duo appeared fairly relaxed and confident throughout the match on Sept. 18, but in the end, it was their “get-down-to-business” attitude that led them to a come-from-behind victory, 4-6, 6-2, 6-4.

“Katie and Caroline are playing together for the first time this season and are doing very well,” said Taylor, who is a local tennis pro by profession.
Taylor commented that this is the era of the baseline player in women’s tennis. That, coupled with a positive outlook and ongoing communication, will be a key to the Blazers’ success.

NDP tied for second in the IAAM A Conference last year with Roland Park Country School. Taylor said that over her four years with the team, much improvement has been made, especially as she watches her players come up through the junior varsity program.