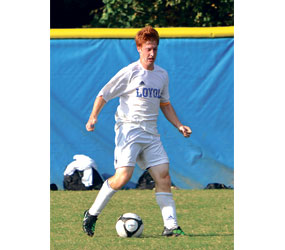 For Loyola Blakefield senior Jamie Dubyoski, playing one sport in the fall isn’t enough to whet his competitive appetite.

Dubyoski is a two-sport athlete for the Dons, playing both soccer and football. It definitely makes this time of year tight for him, but Dubyoski said he wouldn’t have it any other way.

“The fall season is really busy,” he said, “especially with the workload, but it’s fun – I enjoy it.”

Dubyoski has played varsity soccer for three years, and has been a kicker for the varsity football team since he was a freshman. He said he became interested in playing both sports because one of his older brothers, Matt, was the punter for the football team at one point.

As rare as it may be for students to play two sports in one season, Dubyoski is not the first Don to pull off the feat. Matt Jablonski, now a freshman distance runner for the University of Oregon, did so two years ago, running cross country while continuing to play soccer.

On the rare occasion that a scheduling conflict arises, Dubyoski plays soccer since it’s his primary sport. He has been a starter from the day he made the varsity, and was voted team captain this season. The flow of a soccer game, he said, is something that has always enticed him.

“A lot of sports are heavily dependent on the individual,” Dubyoski said. “Soccer is more of a team game. There’s no stop and go with it, and there’s more of a flow with it. You have to play as a team and really work together – I’ve always liked that part about it.”

Dubyoski’s willingness to better himself and his teammates makes him an important part of the Dons, according to soccer coach Lee Tschantret.

“He’s an instrumental part of the team,” said Tschantret. “He’s been my leading scorer every year. He’s one of the better players in the league and a great mentor for the younger kids.”

Dubyoski said his skills as a scorer comes from his love for competition, especially against the tough teams in the Maryland Interscholastic Athletic Association A Conference.

“I enjoy the physical aspect of soccer, especially competing against the top players in the area,” Dubyoski said. “The MIAA is so deep and playing against such great competition, you want to go out and play every game as if it’s your last. When I’m playing, I’ll fight for the ball because I’m so compelled to put it in the back of the net.”

Dubyoski’s desire to be great is not just present during a game, said Tschantret.

“He practices and plays harder than probably anyone on my team,” Tschantret said. “And obviously he does the same in the classroom.”

Dubyoski has a weighted GPA of 3.75 and takes all honors and AP classes.

A parishioner of St. Agnes in Catonsville, Dubyoski is being recruited by a number of Division I colleges, among them Loyola University Maryland and St. Joseph’s University in Philadelphia.