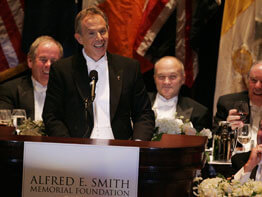 NEW YORK – America and Europe must stand together against terrorism and make it their shared mission to spread justice and liberty throughout the world, the former prime minister of Great Britain said Oct. 18.

“The values we have are not our property. They are our gift to the world,” Tony Blair said in his keynote speech at the 62nd annual dinner of the Alfred E. Smith Memorial Foundation at the Waldorf-Astoria Hotel.

Blair was given two standing ovations by the 1,100 participants at the black-tie event that raises funds for health care initiatives of the Archdiocese of New York.

The formally dressed philanthropists, politicians and clergy heard some good jokes and some inspiring words during the evening, but they did not hear Blair, an Anglican, announce that he will become a Catholic, as some had speculated.

Blair’s wife, Cherie, and the couple’s children are Catholic and he regularly attends Mass with them.
The crowd also did not hear Sir Paul McCartney sing the U.S. and British national anthems, despite a last-minute rumor that the former Beatle would replace Metropolitan Opera soloist Stephen Costello in that role.

In his remarks, Blair made an impassioned reiteration of his 2001 statement that the Sept. 11, 2001, attacks “were not an attack on America, but on all of us and that Britain’s duty was to be shoulder to shoulder (with the U.S.) in confronting it. I meant it then and I mean it now.”

One of the high points of Blair’s 10-year tenure as prime minister was the Northern Ireland peace agreement brokered by his Labor Party government.

“The real achievement in Northern Ireland is that the people decided they’d had enough … and decided to put the past where it belonged. It was a season of peace,” he said.

Blair left office in June. He was recently appointed the special envoy to the Middle East on behalf of the Quartet, a group comprised of the United Nations, the European Union, the United States and Russia. Of the situation in the Middle East, he said, “When terror opposes that which is right, we must defeat it with a whole heart.”

Blair said, “There can be no excuse for such violence. Nothing justifies it and nothing should make us retreat in the face of it. What our armed forces are doing in these countries is a heroic act of self-sacrifice and if they fail … our enemies will get stronger.”

Blair said that the conflict is not one of Islam versus the West, but one of “moderates of whatever faith, color or race against extremism, however it manifests itself.” The challenge requires a global response, he said.

The Al Smith dinner honors the memory of the former governor of New York, who was raised in poverty and was the first Catholic nominated by a major political party to run for president of the United States.

Cardinal Edward M. Egan of New York, host of the dinner, said that Smith was a “warrior” who demanded decent housing, just wages, and fitting assistance for the sick and aging and who championed the welfare of poor children.

The dinner traditionally attracts a glittering array of philanthropists and politicians. The speakers make substantive points, but also poke good-natured fun at one another, at those with whom they share the three-tiered dais, and those public figures who decline to attend what is seen by some as a command-performance of the political season.

The tone reflects Al Smith’s admonition, “Be simple in words, manners and gestures. Amuse as well as instruct. If you can make a man laugh, you can make him think and make him like and believe you.”

Blair told the audience that when he and his wife started their family, they sat down to discuss how their children would be raised. He recalled saying, “Let’s be open-minded,” to which Cherie Blair replied, “Yes, let’s be open-minded. We’ll let you come to Mass.”

After Blair spoke, Cardinal Egan addressed an issue that hung in the room throughout the evening.
“There are rumors that you are thinking about becoming a Catholic,” he said. He then suggested that his dais-mate, New York Mayor Michael Bloomberg, could help Blair with his catechetical studies because the mayor attends so many services at St. Patrick’s Cathedral.

Alfred E. Smith IV, chairman of the dinner, was the master of ceremonies for the $1,000-a-plate event. He reported that the 2006 dinner raised more than $1.4 million.

Smith said that his great-grandfather was a visionary who would have adapted successful New York State health and welfare programs for the national benefit if he had won the presidency in 1928 and served during the Great Depression.