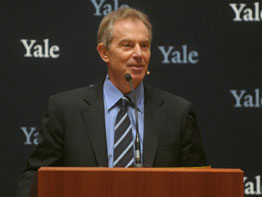 NEW HAVEN, Conn. – Tony Blair has won praise – even from those who have publicly disagreed with him on the Iraq War – for a seminar about the interplay between globalization and religious faith that he just finished teaching this semester at Yale University.

But during the course he had little to say about his own faith as a member of the Catholic Church since 2007.

Aside from praising the Catholic Church’s “fantastic work on the ground” on issues of interfaith relations, Mr. Blair’s comments to students, reporters and in a public address in New Haven at Yale’s Battell Chapel Dec. 11 “stayed on message” and focused on the theme of his teaching.

At the core of Mr. Blair’s thought is the idea that, far from experiencing the decline that many secularists expected decades ago, religious faith not only keenly matters today but its ethical values can and should be used to guide globalization in a more constructive way.

“Globalization shrinks the world and creates a more global community,” the former British prime minister told his seminar students in a “lessons learned” reflection he later shared in his public address.

As a result, Mr. Blair argued, “religious faith and globalization have to find ways to be at peace with each other so that globalization can be more peaceful and run better and more efficiently.”

Those who watched Mr. Blair in action at Yale guessed that he didn’t talk about this own faith because the issue was of little interest to Americans, unlike the way it has intrigued the British public.

Recently, for example, The Daily Telegraph newspaper in London ran a story on an interview Mr. Blair did with the BBC on his religious faith with the headline: “Tony Blair to break his silence on religion.”

Another London newspaper, The Times, reported Dec. 13 that Mr. Blair told the BBC he regrets now that he did not discuss religion while he was prime minister, from 1997 to 2007, though he acknowledged that one reason he did not become a Catholic earlier was because of possible negative reaction in Great Britain.

It said he confirmed to the BBC that he and his wife, Cherie, herself a Catholic, were raising their children Catholic before he joined the church and that he had been attending Mass for more than two decades.

Harold Attridge, the Catholic lay dean of Yale Divinity School, said in an interview with Catholic News Service that Mr. Blair, who was confirmed as an Anglican while an undergraduate at Oxford University, briefly spoke to him about the subject and said he simply felt at home in the Catholic Church but could not, given the sensitivities of politics and tradition, join the church until he had left office.

Mr. Attridge said that while at Yale Mr. Blair was more interested in examining the issue of religious faith in a global context.

Miroslav Volf, the Croatian-born Christian theologian and the director of Yale’s Center for Faith and Culture who co-taught the seminar with Mr. Blair, said the issue of his Catholicism was discussed once in class and only marginally. He described Mr. Blair in lectures as “taking a ‘helicopter view’” of the issue of religion.