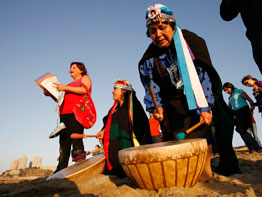 SANTIAGO, Chile – Chilean Catholic bishops are working to resolve a situation in which an imprisoned Mapuche woman, convicted of arson under the country’s anti-terrorist legislation, is being force-fed intravenously after more than 100 days on a hunger strike.

The woman, 38-year-old Patricia Troncoso Robles, wants prison benefits for herself and other Mapuche activists convicted under legislation enacted during the 1973-90 dictatorship of Gen. Augusto Pinochet. She has served half of her 10-year sentence.

At serious risk of death after losing some 60 pounds, Troncoso was transferred in late January to a hospital in Chillan, despite medical recommendations to have her transported to the capital, Santiago. Authorities did not notify or consult her family before they moved her.

Church officials said Jan. 23 that Troncoso lies strapped to a bed and is being fed intravenously against her will. She is allowed visits only from church officials.

Six pro-indigenous activists began a hunger strike in the Concepcion cathedral Jan. 23 to support Troncoso. Father Jose Cartes, a priest of the Archdiocese of Concepcion appointed to negotiate with the cathedral hunger strikers, said Archbishop Ricardo Ezzati Andrello had not asked police to remove the demonstrators. The archbishop was scheduled to talk to the six Jan. 24.

Bishop Carlos Pellegrin Barrera of Chillan visited Troncoso shortly after she was hospitalized, then called on the government to listen more to the Mapuche.

“I wish the authorities could come a bit closer and address this serious situation she is going through, which somehow represents the expression of America’s indigenous peoples, and the Mapuche people in particular. In our country there is too much discrimination against the Mapuche cause,” he said.

Bishop Pellegrin appointed a Spanish priest to be at Troncoso’s disposal at the hospital.

On Jan. 22, Father Eduardo Morin of the Diocese of Rancagua gave Troncoso a personal letter from Rancagua Bishop Alejandro Goic Karmelic, president of the Chilean bishops’ conference, reiterating the church’s solidarity with the Mapuche and asking her to end her hunger strike.

Bishops Goic, Pellegrin and Manuel Camilo Vial Risopatron of Temuco have been leading efforts to resolve the specific demands of Troncoso and other activists and to press the government to address the long-standing demands and grievances of the Mapuche, who make up about 10 percent of Chile’s population. The Mapuche are concentrated in the Temuco area, about 400 miles south of Santiago.

Legislation enacted during the Pinochet dictatorship offered subsidies, land and resources to companies to exploit land and forests, and Mapuche families, who rarely hold formal legal titles to their property, were forcibly removed from more than 90 percent of their land. Since the return to civilian rule in 1990, the government has distributed plots of land to Mapuche families, but the land does not resemble what they originally owned.

The Mapuche grievances also include discrimination, police abuse of power, extreme poverty, environmental degradation and loss of natural resources, and the application of anti-terrorist laws when they protest or take sometimes-violent action against people they claim are occupying their lands illegitimately.

An October 2004 Human Rights Watch report, “Undue Process: Terrorism Trials, Military Courts and the Mapuche in Southern Chile,” said: “The unjustified use of terrorism charges keeps Mapuche leaders in pretrial detention for months. Investigations conducted by the public prosecutor can be kept secret for up to six months. At the trials themselves, key evidence may be admitted in oral hearings from ‘faceless’ witnesses whose identity is withheld from the defense. … Mapuche individuals accused of violence against the police are tried in military courts in proceedings that do not meet basic requirements of independence and impartiality.”

On Jan. 3, 22-year-old agronomy student Matias Catrileo Quezada was shot and killed by police as he and a group of Mapuche entered private property. He, Troncoso and others belonged to a radical indigenous group that seeks to recover property through land occupations and sometimes-violent actions, such as arson.

Catrileo’s killing resembled that of a 17-year-old Mapuche shot by the police in 2002; in that case, a court ruled the police had acted in self-defense and closed the investigation without convictions.

With the earlier death in mind, the Mapuche retained Catrileo’s body and literally ran with it, refusing to hand it over to authorities because they said the autopsy would be manipulated to favor the police.

The body was delivered to the morgue only after intervention by Bishop Sixto Parzinger Foidl of Villarrica, Divine Word Father Fernando Diaz Fernandez and attorney Maria Isabel Castrillo Costa of the Indigenous Institute Foundation.

“The death of a young man, the violent actions against innocent people and the use of force are an alarming symptom of a conflict that, unfortunately, has not been addressed in its root causes,” Bishop Goic said in a statement on behalf of the bishops’ conference.

The Mapuche conflict is set in the context of “lack of knowledge, prejudice and discrimination against indigenous peoples, and of policies that have proven to be inadequate,” he added.