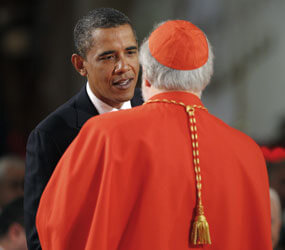 WASHINGTON – Sounding many of the same themes, bishops around the country are urging Catholics to contact their members of Congress about the need for health care reform and the importance of keeping abortion out of any final plan.

“If ever there was a need for the united Catholic voice to be heard clearly and strongly, now is the time,” said Bishop Robert E. Guglielmone of Charleston, S.C., in an Aug. 26 letter that he asked priests to post in their parish bulletins.

“Our representatives and senators need to hear our voice and we have a voice that is credible because it … is a moral voice and one that has centuries of experience in health care,” he added.

Many of the bishops’ comments quoted extensively from earlier letters on health reform by Bishop William F. Murphy of Rockville Centre, N.Y., and Cardinal Justin Rigali of Philadelphia, who chair the U.S. Conference of Catholic Bishops’ committees on Domestic Justice and Human Development and on Pro-Life Activities, respectively.

Those letters stressed the need for a health care system that is accessible and affordable for all; that covers everyone from conception to natural death; that does not erode current federal policy against funding abortions; that preserves freedom of conscience for providers and institutions; and that controls costs and applies them equitably among payers.

Many bishops also urged Catholics in their dioceses to stay informed about the status of health care efforts by frequent visits to the USCCB Web site at www.usccb.org/healthcare.

“The Catholic Church does not endorse any particular prescription for what a revamped system should look like,” noted a statement by three officials of the Archdiocese of Cincinnati that was endorsed by Archbishop Daniel E. Pilarczyk.

The church sees the present moment as “an opportunity that should not be buried by partisan politics or misleading exaggerations of what the emerging legislation does or does not include,” the statement said. “We hope that civil dialogue will produce an affordable method that provides ready access to quality, comprehensive and affordable health care for every person living in the United States.”

In Boston, in a Sept. 2 blog post about the funeral of Sen. Edward Kennedy, who had been a leader on health care reform, Cardinal Sean P. O’Malley said he spoke briefly to President Barack Obama about health care when he welcomed the president to the basilica for the senator’s funeral.

He told Obama the U.S. bishops “are anxious to support a plan for universal health care, but we will not support a plan that will include a provision for abortion or could open the way to abortions in the future.”

One of the most extensive analyses of the elements of health care reform came in a joint statement by Archbishop Joseph F. Naumann of Kansas City, Kan., and Bishop Robert W. Finn of Kansas City-St. Joseph, Mo.

“Despite the many flaws with our current policies, change itself does not guarantee improvement,” they said in the Sept. 1 statement. “Many of the proposals which have been promoted would diminish the protection of human life and dignity and shift our health care costs and delivery to a centralized government bureaucracy.”

The Catholic obligation to the common good requires that “we must find some way to provide a safety net for people in need without diminishing personal responsibility or creating an inordinately bureaucratic structure which will be vulnerable to financial abuse, be crippling to our national economy, and remove the sense of humanity from the work of healing and helping the sick,” the Kansas City bishops said.

They and other bishops also stressed the role individuals must play in caring for their own health.

“All individuals, including those who receive assistance for health care, might be given incentives for good preventative practices: proper diet, moderate exercise and moderation of tobacco and alcohol use,” they said.

The Kansas City statement quoted from an earlier message on health reform by Bishop R. Walter Nickless of Sioux City, Iowa, which said: “The gift of life comes only from God, and to spurn that gift by seriously mistreating our own health is morally wrong.”

“The most effective preventative care for most people is essentially free – good diet, moderate exercise and sufficient sleep,” Bishop Nickless said. “But prenatal and neonatal care are examples of preventative care requiring medical expertise, and therefore cost; and this sort of care should be made available to all as far as possible.”

Bishop Blasé J. Cupich of Rapid City, S.D., said health care reform “is not just a task facing the government” but also related to “our need to take personal responsibility for our health.”

“In the face of powerful pressures in a consumerist society, we should not overlook in this moment of health care reform the need to exercise moderation in a world of abundance,” he said. “If we say that health care is a right rooted in our belief in human dignity, then we need to respect our own life and dignity by adopting lifestyles that enhance our health and well-being.”

Cardinal Rigali also issued his own statement in which he stressed the importance of not allowing the praiseworthy goal of health reform to be derailed by abortion.

“At a time when so much good will is being shown to create an equitable, affordable and just health care system in the United States, it would be tragic if this praiseworthy end were corrupted by including an immoral means, namely provisions for abortion,” he said. “This would not be health care.”

In a column for the Aug. 27 issue of his archdiocesan newspaper, The Catholic Spirit, Archbishop John C. Nienstedt of St. Paul and Minneapolis said health reform legislation “has far-reaching moral implications for us as a people and as a nation.”

“What it permits and what it disallows speaks volumes about the values that we hold dear and are willing to fight to defend,” he added. “This is, in my mind, one of the most important issues of our lifetime. Please let your thoughts be known.”

Bishop Paul S. Loverde of Arlington, Va., reminded Catholics of the parable of the wise and foolish virgins in his commentary on health care reform. Christ’s parable, he said, “illustrates an essential characteristic of the Christian in public life: vigilance.”

“The truly vigilant realize that it is not reforming the health care system in itself that is wrong – in fact some reform is needed,” Bishop Loverde said. “Rather, it is the specific proposals included in that reform that could endanger the lives of the unborn, and the freedom of conscience of health care providers and citizens.”

He urged Catholics to educate themselves about the various health reform proposals before Congress, contact their representatives with their views and, “first and foremost,” to pray.

“With earnest hearts, we ask (God) for the grace to be witnesses to the dignity of life and for his blessing on our legislators in their debates and decisions,” he said.