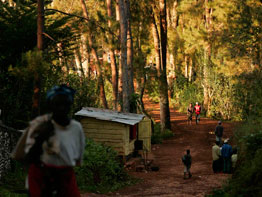 WASHINGTON – Though President George W. Bush may not be able to officially act on a request by the U.S. Catholic bishops that he grant Haitians temporary protected status for the next 18 months for humanitarian reasons, a Department of Homeland Security official said federal efforts have been implemented to provide nationals from that Caribbean country with tools to remain in the U.S. for the moment.

The bishops sent a letter to Bush Oct. 9 asking that he grant Haitians currently in the U.S. temporary protected status, or TPS, which permits nationals of a designated nation who are living in the U.S. to reside in this country legally and to qualify for work authorization.

Such a designation is based on a determination that armed conflict, political unrest, environmental disaster, or other extraordinary and temporary conditions exist in a nation and that the return of that country’s nationals would further destabilize the nation and potentially bring harm to those who go back.

“Haiti meets the standard for TPS because it has experienced political tumult, four natural disasters and severe food shortages in the last eight months alone, not to mention the devastation of Hurricane Jeanne in 2004,” said Cardinal Francis E. George of Chicago, president of the U.S. Conference of Catholic Bishops.

A copy of his letter was released Oct. 14 by the USCCB Office of Media Relations.

“We value the bishops perspective and will of course respond to their letter,” said Russ Knocke, a spokesman for the Department of Homeland Security. “We are sympathetic to the situation in Haiti and have already taken on several administration measures to provide humanitarian assistance.”

That formal request must come from the U.S. Congress or from the government of the country whose citizens need temporary refuge, he said.

That request then must be assessed by the State Department and U.S. Citizenship and Immigration Services before the president can consider temporary protected status, Mr. Knocke said.

In the meantime, U.S. Immigration and Customs Enforcement has temporarily suspended the deportations of Haitian nationals, and Citizenship and Immigration Services has extended visas for tourists and business people already in the U.S., as well as Haitian students attending U.S. schools, he said.

“If they are already here on a visa, and would like to extend their stay, they will get priority processing to stay,” Mr. Knocke said. “They go to the front of the line, if you will.”

Citizenship and Immigration Services is also upgrading visas for Haitian students who are asking to work in the U.S. to pay for school, he said.

“There has been substantial disruption in living conditions and Haiti is unable to handle adequately the return of its citizens abroad,” Cardinal George told Bush in his letter.

Haiti also is still suffering the effects of Hurricane Mitch in 2004, and in August and September of this year, the Caribbean nation experienced death and destruction from more storms that passed through – two hurricanes, Ike and Gustav, and two tropical storms, Fay and Hanna.

The cardinal’s letter also made the point that conditions in Haiti – considered the poorest nation in the Americas – are comparable to or worse than those in nations that recently received an extension of temporary protected status, such as El Salvador, Honduras and Nicaragua.

The cardinal’s letter rejected concerns that granting Haitians temporary protected status would cause a massive “boatlift” bringing thousands of Haitians to the U.S., since the status only would be available to Haitian nationals already in the U.S. at the time of the designation.