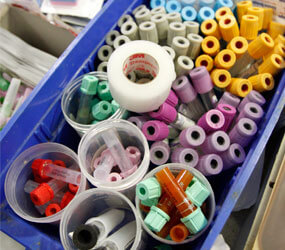 WASHINGTON – In the final days of the national health reform debate, U.S. bishops called for political courage and for prayers that Congress would come up with legislation that would respect human life and dignity at all stages.

“In moments of concern and crisis, Catholic tradition through the centuries has unfailingly urged the faithful to turn to the spiritual aids of prayer and fasting in order to draw closer to our Lord and his will,” said Bishop Paul S. Loverde of Arlington, Va., in a letter calling Catholics to a day of prayer and fasting March 15.

He said the prayers “for protecting the life, dignity, health and conscience rights of every human person in any legislation that Congress considers” should continue beyond March 15.

In an opinion piece published online by The Washington Post March 16, the chairmen of three committees of the U.S. Conference of Catholic Bishops rebuked the House Democratic leadership for “ignoring the pleas of pro-life and Hispanic members of their caucus” on abortion and immigration and criticized the Republicans for pledging “to do all they can to defeat the legislation by threatening to object to any improvements in the Senate bill, further complicating the process.”

Bishop Robert N. Lynch of St. Petersburg, Fla., one of two bishop-members of the Catholic Health Association’s board of trustees, said recent statements by the leadership of the USCCB and CHA on health care reform put “two organizations within the church seemingly at loggerheads.”

Cardinal Francis E. George of Chicago, USCCB president, has said changes must be made in the Senate-passed health bill’s abortion language before the House considers it, while Sister Carol Keehan, a Daughter of Charity who is CHA president and CEO, said changes can be made later if needed.

“I side with the bishops on this one,” said Bishop Lynch in a March 16 column on his diocesan Web site. He said, however, that a recent illness had made him unable to attend recent meetings of the CHA board or the USCCB.

“I hope and pray that in these final decisive days, the Congress will see the wisdom of the church’s position on abortion in health care as articulated by the bishops and the experience and wisdom of the Catholic health care providers who yearn for a reform of a system which is failing and becoming incredibly expensive – to maintain and to access,” he wrote.

Both Archbishop Timothy M. Dolan of New York and Archbishop Charles J. Chaput of Denver pointed out in columns about the debate posted on their respective Web sites that if the health reform legislation ultimately fails in Congress, it will not be because of the bishops but because of President Barack Obama’s unfulfilled promises not to expand federal funding of abortion.

“We’re not the obstructionists here, since all we’re insisting upon is that the understanding that tax money not pay for abortions, in place since 1975, remains,” Archbishop Dolan said.

Archbishop Chaput said the bishops “have tried earnestly for more than seven months to work with elected officials to craft reform that would serve all Americans in a manner respecting minimum moral standards.”

“The failure of their effort has one source,” he added. “It comes entirely from the stubbornness and evasions of certain key congressional leaders, and the unwillingness of the White House to honor promises made by the president last September.”

The opinion piece by the three USCCB chairmen had a similar message about the need to preserve the Hyde amendment, which has banned federal funding of abortion since 1975.

“It is not those who require that the Hyde amendment be fully applied who are obstructing reform, since this is the law of the land and the will of the American people,” they said. “Rather, those who want to expand federal participation in abortion, require people to pay for other people’s abortions and refuse to incorporate essential conscience protections (both within and beyond the abortion context) are threatening genuine reform.”

Some bishops, like Cardinal Justin Rigali of Philadelphia, asked priests and parishioners to contact their members of Congress about the upcoming vote and distributed copies of the USCCB-generated bulletin insert listing problems with the Senate-passed health reform bill currently before the House.

“Please join me in praying that health care reform in our nation will protect human life, dignity and the consciences and health of all, especially the poor and vulnerable,” said the cardinal in a March 15 note to archdiocesan staff members.

Cardinal George spoke for the conference in a statement issued late March 15.

He said the USCCB concerns about abortion in the health reform bill were “not quibbling over technicalities.”

“The deliberate omission in the Senate bill of the necessary language that could have taken this moral question off the table and out of play leaves us still looking for a way to meet the president’s and our concern to provide health care for those millions whose primary care physician is now an emergency room doctor,” the cardinal said.

He acknowledged that the USCCB analysis “is not completely shared” by CHA leaders.

“They believe, moreover, that the defects that they do recognize can be corrected after the passage of the final bill,” Cardinal George said. “The bishops, however, judge that the flaws are so fundamental that they vitiate the good that the bill intends to promote.

“Assurances that the moral objections to the legislation can be met only after the bill is passed seem a little like asking us, in Midwestern parlance, to buy a pig in a poke,” he added.

In his column, Archbishop Chaput had strong criticism for “groups, trade associations and publications describing themselves as ‘Catholic’ or ‘pro-life’ that endorse the Senate version,” saying they were “doing a serious disservice to the nation and to the church, undermining the witness of the Catholic community, and ensuring the failure of genuine, ethical health care reform.”

“By their public actions, they create confusion at exactly the moment Catholics need to think clearly about the remaining issues in the health care debate,” he added. “They also provide the illusion of moral cover for an unethical piece of legislation.”