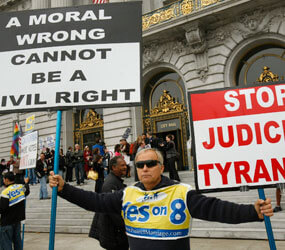 WASHINGTON – In actions to fight state efforts to legalize same-sex marriage during 2010, the U.S. bishops reiterated the church’s teaching on the sanctity of marriage, made their Ad Hoc Committee for the Defense of Marriage a permanent subcommittee and distributed materials explaining the Catholic view of traditional marriage.

“To promote and protect marriage as the union of one man and one woman is itself a matter of justice,” the bishops said in a pastoral letter approved in 2009. “In fact, it would be a grave injustice if the state ignored the unique and proper place of husbands and wives, the place of mothers and fathers, and the rights of children.”

The federal government is prohibited from recognizing same-sex marriages by the Defense of Marriage Act. In 30 states, constitutional amendments define marriage as being between one man and one woman, and in nine other states, there are laws that explicitly ban same-sex marriages.

Currently, performing same-sex marriage is legal in five states – Connecticut, Iowa, Massachusetts, New Hampshire and Vermont – as well as in the District of Columbia. An Indian tribe also has legalized it.

Illinois will join four other states that have legalized civil unions when Gov. Pat Quinn signs into law early in 2011 a measure passed by the Legislature, as he has said he will do. The legislation provides spousal rights to same-sex partners in a civil union and grants legal rights in decision-making for medical treatment, survivorship, adoptions, and accident and health insurance.

The Catholic Conference of Illinois, which represents the state’s bishops on public policy matters, opposed the measure, saying it will “explicitly grant these unions the same status as marriage in state law.”

In July, Hawaii Gov. Linda Lingle vetoed a bill that would have established civil unions in that state, saying she believed the legislation was “essentially (same-sex) marriage by another name.” The Hawaii Catholic Conference and the Hawaii Family Forum praised her decision, saying it “affirms the will of Hawaii citizens.”

Shortly before the midterm elections, Archbishop John C. Nienstedt of St. Paul and Minneapolis sent a letter and DVD to Catholics about the church’s response to measures recently introduced in the Minnesota Legislature that would change the definition of marriage to include same-sex couples.

“Defining marriage as simply a union of consenting parties will change the core meaning of marriage in the public square for every Minnesotan,” the archbishop said.

A battle continued in the courts over California’s Proposition 8, a 2008 voter-approved initiative that said only marriage between a man and a woman would be recognized in the state. In August, a U.S. District Court judge ruled it unconstitutional. In December, a three-judge panel of a federal appeals court heard oral arguments in an appeal of that ruling.

No decision was expected for several months. The case was expected to eventually reach the U.S. Supreme Court.

In the District of Columbia, legislation legalizing same-sex marriages prompted Catholic Charities of the Archdiocese of Washington to hand off its adoption and foster care services to another agency and announce that spousal benefits would no longer be provided to new employees or to current employees who want to add a spouse to their coverage. The new law stated no religious leader opposed to such marriages would be compelled to perform them or accommodate them, archdiocesan officials had sought a wider religious exemption.

In neighboring Maryland, Attorney General Douglas F. Gansler issued an opinion in February saying same-sex marriages performed in other jurisdictions could be recognized as legal.

The archbishops of Baltimore and Washington and the bishop of Wilmington, Del., whose dioceses each include parts of Maryland, immediately objected to the opinion, which is not legally binding.

Unlike previous years when many states put proposals to ban or permit same-sex marriage before voters, only one ballot question – Iowa’s Measure 2 – dealt with it this year. The question, which voters rejected, was about holding a constitutional convention where a marriage amendment to the Iowa Constitution could have been initiated.

The bishops’ ad hoc committee, formed in 2008 to raise awareness of the “unique beauty of the vocation of marriage” and the many threats it faces today, was upgraded in November to a subcommittee of the bishops’ Committee on Laity, Marriage, Family Life and Youth. Its chairman, Archbishop Joseph E. Kurtz of Louisville, Ky., was elected to a three-year term as vice president of the U.S. Conference of Catholic Bishops, also in November.

After the Boston school’s decision, Cardinal Sean P. O’Malley said archdiocesan officials would “develop policies and procedures” to guide schools on the issue.

The same-sex issue also was the focus of a major debate over a push to repeal the U.S. military’s “don’t ask don’t tell” policy, which bans homosexual and lesbian service members from being open about their sexuality while they are in the service.

Archbishop Timothy P. Broglio of the U.S. Archdiocese for the Military Services urged retention of the policy, saying the effect of its repeal “has the potential of being enormous and overwhelming.”

“Nothing should be changed until there is certainty that morale will not suffer,” he added.

In its lame-duck session, the Senate failed to vote to repeal it as part of a broader defense authorization bill that was blocked by some lawmakers. The House passed a similar measure earlier this year.