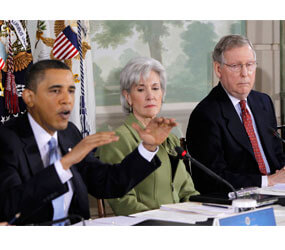 WASHINGTON – As Democratic and Republican leaders gathered in Washington for a health care summit convened by President Barack Obama, the U.S. bishops and other Catholic leaders urged all parties to commit themselves to health care reform that is affordable, accessible and protects the life and dignity of every person.

In a Feb. 24 letter to congressional leadership, the chairmen of three committees of the U.S. Conference of Catholic Bishops asked for “genuine health care reform that will protect the life, dignity, consciences and health of all.”

Similar messages came from the president of Catholic Charities USA and from a coalition of Christian, Muslim, Buddhist and Jewish leaders, including many Catholics.

The bishops’ letter, released a day before the summit, reiterated many of the points made in earlier USCCB messages about health care reform, calling for a prohibition on federal funding of abortion, protection of conscience rights and guarantees that immigrants will have access to the reformed health care system.

The letter was signed by Bishops William F. Murphy of Rockville Centre, N.Y., and John C. Wester of Salt Lake City and Cardinal Daniel N. DiNardo of Galveston-Houston. They chair the USCCB committees on Domestic Justice and Human Development, on Migration and on Pro-Life Activities, respectively.

“It is time to set aside partisan divisions and special-interest pressures to find ways to enact genuine reform,” the bishops said. “We encourage the administration and Congress to work in a bipartisan manner marked by political courage, vision and leadership.”

But they stressed that any final plan must “respect the consciences of providers, taxpayers, purchasers of insurance and others, not violate them” and said it should be “truly universal and not be denied to those in need because of their condition, age, where they come from or when they arrive here.”

“We will continue to work vigorously to advance true health care reform that ensures affordability and access, keeps long-standing prohibitions on abortion funding, upholds conscience rights, and addresses the health needs of immigrants,” the bishops said.

“Dialogue should continue and no legislation should be finalized until and unless these basic moral criteria are met,” they added.

Father Larry Snyder, president of Catholic Charities USA, said in a Feb. 25 statement that the summit participants must “recognize the implications of inaction” as they seek “a bipartisan pathway to reform our broken health care system.”

“People throughout our country are burdened by health care costs, pushing a new generation of Americans into poverty,” he said.

Father Snyder noted that Catholic Charities agencies in Phoenix have been forced to reduce health insurance benefits for their own workers because of reduced donations.

“There are many issues associated with health care reform that divide us as a nation, but one that can unite us all; health care reform is essential to the reduction of poverty in America,” he said. “As the leading voice in the mission to reduce poverty throughout the country, we see fixing the nation’s health care system as integral to our overall efforts.”

In a letter that appeared as a full-page ad in The Hill newspaper Feb. 24, thousands of members and leaders of U.S. faith communities urged Obama and Congress to “complete the task at hand on behalf of the millions who are left out and left behind in our current health care system.”

“Let us not delay health care justice any longer,” they wrote. “This is your moment for political courage, vision, leadership and faith. We urge you to take heart and move meaningful health care reform forward.”