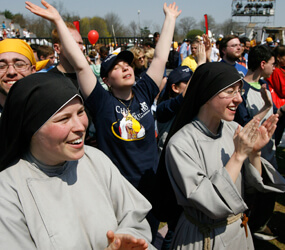 Religious orders may be shrinking in size and their members aging fast, but a study of their newest members offers signs for hope, Holy Cross Brother Paul Bednarczyk, executive director of the National Religious Vocations Conference, said in a Nov. 18 report to the U.S. bishops on a study released this summer.

The “Recent Vocations to Religious Life” study conducted for the vocations conference by the Center for Applied Research in the Apostolate at Georgetown University was the first of its scale ever done, Brother Bednarczyk said.

Brother Bednarczyk called the results of the CARA study “sobering,” but at the same time, emphasized that the responses to the survey engender great hope for the future of religious life.

“Our study has confirmed that part of the richness of religious life lies in its diversity of charisms, lifestyles and ministries that have always been a hallmark of religious institutes in this country,” he told the bishops, gathered in Baltimore for their fall general assembly.

But he said comparing current numbers to the peaks of the 1960s isn’t the most realistic standard.

“The truth is that throughout history men and women religious have always made up a small percentage of our Catholic population,” he said. “The temptation is to compare the high numbers of the ‘50s and ‘60s as the norm, when in actuality, they were an anomaly.”

Among the newest members of religious orders – those who professed vows within the last 15 years – a higher percentage are Hispanic, Asian and African or African-America, Brother Bednarczyk said. And they are older and more likely to be college graduates with career experience.

He noted that religious organizations with the most success in attracting new members have a more traditional style of religious life, in which members live in community, participate in daily Eucharist, pray the Divine Office and engage in devotional practices together. They also are more likely to wear a religious habit.

He said the study is a snapshot of who is entering religious life currently, not necessarily a predictor of future generations.

Brother Bednarczyk said despite the challenges identified by the study, it “affirms that the Holy Spirit continues to inspire and guide the church as evidenced by the founding of new religious institutes, the multitude of charitable works established by religious and, most encouraging, the zeal and passion for the Gospel and hope for the future embraced by our newer members.”

He asked the bishops for their prayerful support of vocations to consecrated life, as well as their cooperation in promoting it “as a viable, joyful and grace-filled option for the men and women in your dioceses.”

Following the presentation, Cardinal Theodore E. McCarrick, retired archbishop of Washington, returned to the subject of the apostolic visitation, saying he had been hearing great concern about it.

“It might be good to consider their great work and give a strong hand of support to (religious women),” he said. It’s time, he added, to tell “our sisters and brothers, especially our sisters, ‘we’re with you; we want you here.’“