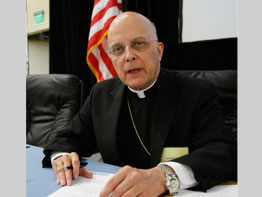 BALTIMORE – The historic significance of the election of President-elect Barack Obama dominated the Nov. 10 opening address of the U.S. Conference of Catholic Bishops’ fall general assembly in Baltimore.

“Symbolically, this is a moment that touches more than our history when a country that once enshrined race slavery in its very constitutional legal order should come to elect an African-American to the presidency,” said Cardinal Francis E. George of Chicago, president of the USCCB. “In this, I truly believe, we must all rejoice.”

In his presidential address at the Baltimore Marriott Waterfront Hotel before hundreds of U.S. bishops, Cardinal George said no political order conforms fully to the kingdom of God, but he prayed the incoming president will be able to succeed in his task for the good of all.

“The odds against success are formidable,” he said. “We are as a nation internally divided and, in a global order, we will be less the masters of our economic and political fate.”

Cardinal George also called on the bishops to rejoice that the hard work by heroic figures such as the Rev. Martin Luther King Jr., the slain civil rights activist, Catholic priests, women religious, bishops and laypeople helped bring about racial reforms in the U.S.

“We can also be truly grateful that our country’s social conscience has advanced to the point that Barack Obama was not asked to renounce his racial heritage in order to be president, as, effectively, John Kennedy was asked to promise that his Catholic faith would not influence his perspective and decisions as president a generation ago,” he said.

“We are, perhaps, at a moment when, with the grace of God, all races are safely within the American consensus,” Cardinal George said. “We are not at the point, however, when Catholics, especially in public life, can be considered full partners in the American experience unless they are willing to put aside some fundamental Catholic teachings on a just moral and political order.”

Though racial justice is one pillar of the Catholic Church’s social doctrine, he pointed out that economic justice – especially for the poor in the U.S. and abroad – must be advocated by the faithful and that the common good can never be adequately obtained in any society that offers legal abortion.

“If the Supreme Court’s Dred Scott decision that African-Americans were other people’s property and somehow less than persons” was still law, Cardinal George said, “Mr. Obama would not be president of the United States. Today, as was the case 150 years ago, common ground cannot be found by destroying the common good.”

Obama will need the prayers of all the bishops and the faithful to meet the tremendous challenges of the presidency in the coming years, including the global economic meltdown, the uncertainty of political regimes and the suffering of so many around the world, he said.

Archbishop Pietro Sambi, apostolic nuncio to the U.S., said the U.S. bishops must also celebrate and support the Catholic laity in America, focus on ethical challenges in advances in science, promote the church’s position that marriage should remain a lifelong union between one man and one woman, and reach out to those who have been sexually abused by clergy.

“We need to rediscover the joy of prayer,” Archbishop Sambi said during his address to the bishops. “Time spent in prayer is never wasteful.”

Cardinal George also stressed that a bishop’s primary duty is to strengthen his flock’s relationship with Christ.

“We extend that pastoral concern, especially at the beginning of a new administration and a new Congress, to Catholics of either major party serving others in government,” he said.

“We meet amidst enormous challenges to our church, our country and our ministry, but that is, to some extent, always the case,” Cardinal George said. “Sometimes I’ve been tempted to think that bishops should be given, at their consecration, not crosiers but mops.”