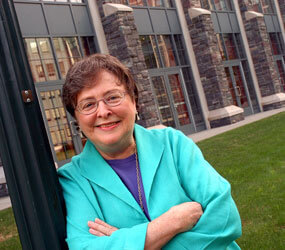 WASHINGTON – In a detailed critique, the U.S. bishops’ Committee on Doctrine has concluded that a 2007 book written by Fordham University theology professor Sister Elizabeth A. Johnson “contains misrepresentations, ambiguities and errors” related to the Catholic faith.

The committee said in a 21-page statement released March 30 that the book, “Quest for the Living God: Mapping Frontiers in the Theology of God,” failed to take the faith of the Catholic Church as its starting point and chose to use standards from outside the faith to “criticize and to revise in a radical fashion the conception of God revealed in Scripture and taught by the magisterium.”

The book was identified for review by the committee during winter 2009-10, said Father Thomas G. Weinandy, executive director of the Secretariat for Doctrine at the U.S. Conference of Catholic Bishops. He did not identify who approached the committee or the exact date when the correspondence was received.

“We don’t go looking for things to criticize,” he said in an interview March 31. “It was only when it was brought to our attention and it was asked that the doctrine committee examine it that we did.”

The statement from the committee, chaired by Cardinal Donald W. Wuerl of Washington, indicated that the book was reviewed because Sister Elizabeth is a well-known theologian and that the book is aimed at a broad audience of general readers. The fact that it is used as a textbook in some theology classes at universities around the country also was a factor, the statement said.

In a statement released March 30, Sister Elizabeth said her book “endeavors to present new insights about God arising from people living out their Catholic faith in different cultures around the world.”

“My hope is that any conversation that may be triggered by this statement will but enrich that faith, encouraging robust relationship to the holy mystery of the living God as the church moves into the future,” she said.

Despite their criticism of the book, the bishops declined to take any disciplinary action against Sister Elizabeth as they have with other theologians who have been prohibited from publishing or teaching at Catholic institutions.

Sister Elizabeth also expressed concern that she was never invited to discuss the concerns that committee members had with the book. “This book was discussed and finally assessed by the committee before I knew any discussion had taken place,” she said.

The Fordham theologian said the committee’s conclusions “paint an incorrect picture of the fundamental line of thought the book develops.” The statement did not elaborate.

A conversation with the bishops about her intentions in the book “would have very likely avoided these misrepresentations,” she said.

“That being said, as a scholar I have always taken criticism as a valuable opportunity to delve more deeply into a subject. The task of theology, classically defined as ‘faith seeking understanding,’ calls for theologians to wrestle with mystery. The issues are always complex, especially on the frontiers where the church’s living tradition is growing. Committed to the faith of the church, I take this statement as an occasion to ponder yet further the mystery of the living God who is ineffable,” she said.

Sister Elizabeth added that she would welcome a conversation with the committee.

In developing their statement, members of the doctrine committee decided not seek a meeting with Sister Elizabeth to discuss their concerns, Father Weinandy told Catholic News Service.

“They felt it was self-evident in the book what she was saying and that it was wrong. The bishops felt it was expedient, since this book has become so popular, to act upon it immediately,” Father Weinandy said.

“The bishops felt that (meeting with her) would just prolong a process that they really didn’t want to prolong,” he added.

Cardinal Wuerl said in a statement that accompanied the committee’s findings that he would have preferred that Sister Elizabeth would have sought an imprimatur (“let it be printed”) that would have signified official permission to publish a book that touches on matters of Catholic faith or moral teaching.

“Although an imprimatur is not required for all books that treat sacred Scripture and theology, it is still a recommended practice,” he said. “By seeking an imprimatur, the author has the opportunity to engage in dialogue with the bishop concerning Catholic teaching expressed in the book. Thus, clarifications concerning the text can be made prior to its publication.

“It would have been helpful if Sister Elizabeth Johnson had taken advantage of this opportunity,” he said.

A member of the Sisters of St. Joseph of Brentwood, N.Y., Sister Elizabeth is an accomplished theologian having published numerous works and lectured widely. She has been president of the Catholic Theological Society of America and the Ecumenical Theological Society and has been honored by numerous Catholic institutions with awards and honorary degrees. The book in question won a first-place award from the Catholic Press Association in the academic theology category.

The first was that she misrepresented the traditional scriptural and Catholic understanding of God and offered instead “a thoroughgoing reinterpretation of the doctrine of God,” by questioning central beliefs of Catholic theology.

The bishops then said that Sister Elizabeth’s view of religious language was inadequate. She held that the language used in the Bible and the Christian tradition to speak of God can only be metaphorical because God is an incomprehensible mystery. However, the bishops maintained that while the faithful may not be able to comprehend fully the mystery of the one God as Father, Son and Holy Spirit, it is possible to know that such is the case.

The bishops’ third point revolved around Sister Elizabeth’s discussion about whether God within his divine nature is able to suffer. Sister Elizabeth appeared to agree with those who say that God can and does suffer because of human failings. Such a view, the bishops maintained, undermined God’s transcendence. Sister Elizabeth, the statement said, incorrectly suggested that God is a being whose existence only different in degree and not in kind from that of created reality.

Fourth, the statement said Sister Elizabeth maintains that because all human language about God is metaphorical, that human names for God evolved out of a particular sociopolitical context. The bishops said that the theologian’s view does not take into account the authority of divine revelation and the biblical and traditional theological language used to speak of God.

The bishops’ fifth concern is that Sister Elizabeth’s work did not uphold the complete and definitive revelation of Jesus as Lord and Savior. She argued that the fullness of truth can only be acquired by taking into account non-Christian religions. In doing so, according to the statement, Sister Elizabeth “denies the uniqueness of Jesus as the Incarnate Word” and that for the “fullness of truth about God, “one needs Jesus + Hinduism, Buddhism, Islam, etc.,” which is “contrary to church teaching.

The statement also cited Sister Elizabeth’s pantheistic view of God, which undermined the traditional understanding of God as “radically distinct from creation.”