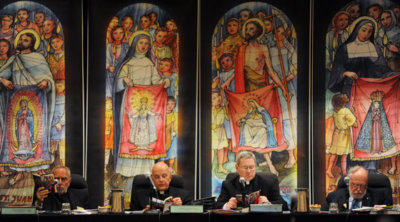 Cardinal George, president of the U.S. Conference of Catholic Bishops, called for the action June 18 on behalf of all the bishops at their annual spring meeting, held this year in San Antonio.

“It has been clear for years that the United States immigration system requires repair and that reform legislation should not be delayed,” he said in a prepared statement. “I would ask President Barack Obama and congressional leaders of both parties to work together to fashion and enact comprehensive immigration reform legislation before the end of the year.”

The bishops said they are prepared to assist Congress and the president in this effort.

Obama has said he intends to take up immigration reform this year, but the White House staff has said they don’t expect it to be resolved until 2010. Some House and Senate committees have begun holding hearings on some aspects of immigration issues.

“We urge respect and observance of all just laws, and we do not approve or encourage the illegal entry of anyone into our country,” Cardinal George said.

“From a humanitarian perspective, however, our fellow human beings, who migrate to support their families, continue to suffer at the hands of immigration policies that separate them from family members and drive them into remote parts of the American desert, sometimes to their deaths,” he said. “This suffering should not continue.”

Congress is currently working on several individual bills to address other immigration issues.

Oft-shelved efforts have been revived to pass broadly supported bills dealing with agricultural workers and students without legal status who came to the U.S. with their parents.

Known respectively as the Agricultural Jobs, Opportunity, Benefits and Security Act, or AgJOBS, and the Development, Relief and Education for Alien Minors Act, or the DREAM Act, both bills may advance through Congress before a comprehensive bill does.

The bishops, however, have made it clear they want Congress also to deliver a comprehensive immigration reform bill before 2010 to deal compassionately with the estimated 12 million undocumented immigrants currently residing in the U.S.

“Now is the time to address this pressing humanitarian issue which affects so many lives and undermines basic human dignity,” Cardinal George said. “Our society should no longer tolerate a status quo that perpetuates a permanent underclass of persons and benefits from their labor without offering them legal protections.

“As a moral matter,” he said, “we must resolve the legal status of those who are here without proper documentation so that they can fully contribute their talents to our nation’s economic, social and spiritual well-being.”