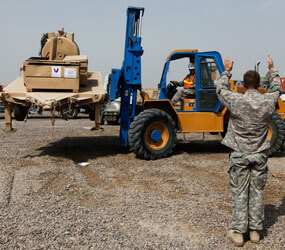 The nation and American Catholics both can help keep Iraq from sliding into chaos once U.S. troops leave the country at the end of the year, said two U.S. bishops who visited Iraq for four days in October.

“The U.S. withdrawal of combat troops does not reduce the obligation to help,” principally to protect Iraqis and provide assistance), said Bishop Gerald F. Kicanas of Tucson, Ariz., chairman of the board of Catholic Relief Services, during a Nov. 15 press briefing during the U.S. bishops’ fall general meeting in Baltimore.

“It would be extremely important for our government to participate in an orderly transition. … The great fear right now is if the troops leave, the violence will intensify,” Bishop Kicanas said, adding the United States must “make sure people’s lives are protected and violence doesn’t erupt.”

The American public needs to be sold on the necessity of providing sufficient aid to Iraqis in a time of budget crunches, said Bishop George V. Murry of Youngstown, Ohio, who accompanied Bishop Kicanas to Iraq.

“It becomes a matter of not putting Iraq out of our minds” once the soldiers have returned, Bishop Murry said. “Along with the pain that we went through and the number of men and women who have lost their lives, we talked about going into Iraq to liberate Iraq from years of oppression.

“That liberation is not just the physical removal of Saddam Hussein, but we have to give them the opportunity to live their lives with dignity, with freedom and with hope.”

Bishop Murry said that to aid Iraq he envisioned a “modern-day version of the Marshall Plan, which helped to rebuild Europe after the Second World War.”

“When something comes up that our country and other countries consider important we do find the money,” he said. “Iraq is suffering from the results of the war. The United States and the nations that joined with it in the war can help Iraq rebuild their infrastructure and rebuild their country.”

Bishop Murry added, “We have to be open to Iraqi refugees coming to this country, and to countries in Western Europe.”

Iraqi-Americans and Iraqis living in Jordan have complained about the U.S.’s slow pace of processing and rejection of immigration requests for reasons they cannot comprehend.

The size of the Christian minority in Iraq, principally Chaldean Catholics, has shrunk since the war. While there had been an estimated 100,000 Christians in the capital city of Baghdad, Bishop Murry said he was told only 4,000 remain today.

“We have focused so much on disengaging form Iraq and getting our soldiers back to our families,” he said. “Our president and our Congress have to realize there’s more to the question than bringing the soldiers hope. We’re leaving a country that’s in very difficult straits and they need our help more than ever before.”

Bishop Kicanas said a frequent refrain he heard during the Iraq visit was, “We need jobs. We need work. We need peace.” He added opportunities for work must be provided, noting that Caritas Iraq, which receives funding from CRS, is teaching women how to cook and how to sew skills that can translate into jobs.

He said the United States needs to reauthorize its Commission on International Religious Freedom, which will cease to exist if the Senate action doesn’t reauthorize it by Nov. 18.

Having it in place “would be extremely important for our government to participate in an orderly transition,” Bishop Kicanas said.

“To do the right thing always involves leadership. Historically, Americans have not walked away from people in need,” Bishop Murry said, citing earthquake victims in Haiti and Japan, and tsunami victims in Indonesia. “Americans step up to the plate and help.”

Bishop Murry said Congress should also approve S.1245, a Senate bill that would appoint special envoy to the Middle East to safeguard religious rights. Prayer is also helpful, he added.

“A third thing people can do is give,” Bishop Murry said. “The church has some agencies in place. CRS can direct funds in Iraq. The Catholic Near East (Welfare Association) does that as well. And the Dominican sisters have some very fine programs on the ground in Iraq.”