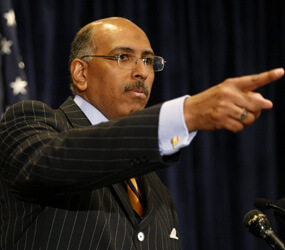 EVANSVILLE, Ind. – Bishop Gerald A. Gettelfinger of Evansville said he will not attend an April right-to-life dinner where Michael Steele, chairman of the Republican National Committee, is scheduled to speak because he objects to comments the GOP leader made about abortion.

The bishop’s decision followed a widely circulated March GQ magazine interview in which Mr. Steele, a Catholic, was asked if he thinks women have the right to choose abortion. He answered, “Yeah. I mean, again, I think that’s an individual choice.”

Following publication of the interview, Mr. Steele issued a statement, saying “I am pro-life, always have been, always will be.” He went on to say that “the Republican Party is and will continue to be the party of life.” He said he supports the Republican platform that calls for a Human Life Amendment.

After speaking with Mr. Steele on the phone March 20, and after examining the statement issued by Mr. Steele after the GQ interview, Bishop Gettelfinger wrote in a letter to the head of the organization sponsoring the dinner that his “early decision not to attend still stands.”

He said Mr. Steele’s answer seemed to emanate “from a political stance, not a principled one.”

“The principled answer for us is that there can be no equivocation,” Bishop Gettelfinger continued. “Intentional abortion is an act of killing the unborn. There is no room for choice in this deadly matter. Mr. Steele assiduously avoids such strong language.”

The bishop made the comments in a letter to Mary Ellen Van Dyke, executive director of Vanderburgh County Right to Life.

Before writing to Ms. Van Dyke, Bishop Gettelfinger had told Jim Collins, director of the diocesan Catholic Charities agency, that he would not attend the banquet if Steele were the speaker. Mr. Collins is active in the pro-life movement and is a former banquet co-chair.

Emily Snipes, pro-life coordinator at Catholic Charities and a member of the Vanderburgh County Right to Life board, told Ms. Van Dyke about the bishop’s decision.

But when board members learned about it, no action resulted and the invitation to Mr. Steele was not withdrawn.

Vanderburgh County Right to Life’s executive board had earlier shared the bishop’s concern about Mr. Steele’s comments on abortion published in GQ, but after speaking with Mr. Steele, Ms. Van Dyke said the committee members were satisfied with his pro-life position.

In a telephone interview March 20, Ms. Van Dyke told The Message, Evansville’s diocesan newspaper, that Mr. Steele “had been highly touted as a pro-life speaker.” She said he had been elected as the lieutenant governor of Maryland where “he ran as a pro-life candidate.”

Mr. Steele was booked as a speaker with the assistance of Ambassador Speakers Bureau, which is described on its Web site as the oldest and most established Christian-based talent agency in the United States.

Following the GQ interview, Ms. Van Dyke said that, “after much research and investigation, the board felt that we should go along with our contract.”