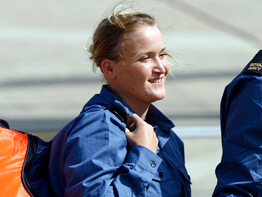 Bishop Thomas Burns of the Bishopric of the Forces said the decision by the Iranian government to free the 14 men and one woman was “not just as the result of diplomacy, but also as an act of mercy” in accordance with Islam.

He said in a statement issued to Catholic News Service April 4 that the Iranians decided “to put their faith into action to resolve the situation.”

“Faith in a forgiving God has been exemplified in action by their good deeds,” he said.

“My delight will be shared certainly by the 15 naval personnel themselves as well as by their navy colleagues who know them so well, and by their families, friends and loved ones,” he said. “There will also be a degree of quiet satisfaction among the diplomatic community that they have brought this crisis to a satisfactory end.”

Iranian President Mahmoud Ahmadinejad, announcing the release of the captives at an April 4 press conference in Tehran, said the Iranian people forgave the sailors for allegedly straying into their territorial waters. He said they were being released as a gift to Great Britain to mark Easter “and the birthday of the great prophet of Islam” March 30.

The 15 service personnel flew back to England from Tehran April 5 after spending 13 days in captivity, during which time they repeatedly were paraded on Iranian television.

Bishop Burns had issued an appeal April 2 to Ayatollah Ali Khamenei, the Islamic republic’s supreme leader, asking him to authorize the release of the group seized by Iranian naval units during a routine patrol of contested waters March 23.

The bishop told CNS April 5 that he had made the appeal through British media and that he had no idea if it had reached Iranian authorities.

“The release of the sailors and marines could indeed be in response to many people’s prayers and hopes,” he said. “Iran’s favorable response is an expression of Islamic generosity, in the spirit of a common faith that is shared by both countries and is rooted in the faith that comes from Abraham, the father of all nations.”

Elected as supreme leader of the country in 1989, Ayatollah Khamenei has ultimate political authority in Iran and can overrule any decision taken by the country’s hard-line president.

According to British media, the captives were released after Ayatollah Khamenei ordered Ahmadinejad to bring the standoff to a conclusion.

Iran has maintained that the sailors were in Iranian territorial waters when captured in the northern Persian Gulf March 23, but the British government has insisted they were in Iraqi waters when returning to their mother ship in light boats after searching a merchant vessel.