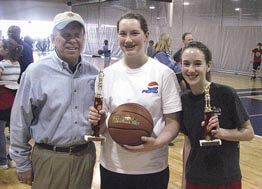 Where was 13-year-old Ashley Turnbull when the women’s top-ranked Duke Blue Devils had one-tenth of a second left on the clock in the NCAA quarterfinals March 24 and had the chance to win or tie by sinking either of her two free throws?

Duke’s Lindsey Harding missed both shots, and the Blue Devils headed back to North Carolina. But enough about Duke. What about Ashley Turnbull?

Turnbull patiently waited for her turn at the line. Shooting 25 consecutive foul shots, Turnbull kept her rhythm and her focus throughout the contest. As she approached the line, she knew the number to beat was 17. At her 20th shot, Ashley was 15 for 20 but then hit the last four out of five shots to outperform her competition and take first place for the second year in a row.

Turnbull is a low post forward for the Bishop Walsh eighth-grade team and an altar server at Ss. Peter and Paul in Cumberland.