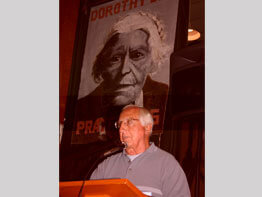 He said the United States government teaches that there are no innocent civilians and preparations are being made to use conventional or nuclear weapons even at the hint of threat.

“The weapons of war must be abolished before they abolish us,” he said.

Organizers said the national Catholic Worker gathering, held July 9-12, drew more than 500 Catholic Workers and other interested individuals from around the U.S. and Germany and included morning prayer, talks, workshops, a play, music and dancing.

In his remarks, Bishop Gumbleton talked about President John F. Kennedy’s speech to the United Nations in 1961 and how he wanted a peace race with the Soviet Union.

“John Kennedy would have led us on this waging of peace,” the bishop concluded. “He was not able to do it, but we are.”

Frank Cordaro of the Phil Berrigan Catholic Worker community in Des Moines, Iowa, told of some who have tried to wage peace. He asked how many listeners had attended peace demonstrations, been arrested for protesting and done jail time. Many raised their hands.

He told of pacifism becoming activism. The audience applauded at his mention of Jesuit Father Daniel Berrigan and his late brother, Philip, and late Worcester pacifist Tom Lewis.

All three were part of the Catonsville Nine, who in 1968 burned draft board files to protest the Vietnam War. They burned 600 files with homemade napalm at a draft board office in Catonsville.

It is as natural for the Catholic Worker to protest war as to serve soup, which is one of its best contributions to the church, Mr. Cordaro said.

“Violence requires … keeping the bad guys out … reducing the other to … less than human,” she said, noting that war victims are called “targets” or “collateral damage.”

“Disregard foments the violence … and we counter that with our regard,” she said.

Ms. Schaeffer-Duffy invited listeners to share ideas and lamented the prospect of war with Iran.

“What if Iran decides to come after us first and we’re annihilated?” asked local Catholic Paula Courtney.

“For me, the question is, ‘What would Jesus do?’” someone responded.

“Jesus said, ‘Those who live by the sword die by the sword,’” said another. “The sword can be hostile acts toward the people who acted in a way that did not please me.”

Local Catholic Worker Christine Lavallee said the movement’s identity is “our deep faith that Christ has redeemed the world.” She asked whether members should seek change through the church or government.

The Austrian farmer was beheaded in 1943 after he refused to fight in Hitler’s army. His refusal to serve was not supported by his priest, his bishop or most of his Catholic friends. He was beatified by Pope Benedict XVI last October.

“He taught us how to die, not how to kill,” he said. “You die loving your enemy – the one putting you to death.”

Prophets speak the truth through words and actions, he said, explaining that pouring blood at the Pentagon is an attempt to change public policy “before our nation leads the world to its destruction.”

Speaking of Iran developing nuclear weapons, Bishop Gumbleton said, “We have violated that treaty; if we want to stop Iran from violating the treaty, we have to start living it ourselves.”