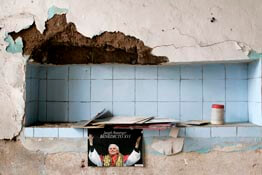 LIMA, Peru – People left homeless by the magnitude 8 earthquake that struck Peru Aug. 15 face an immediate shortage of food and water, said Bishop Guido Brena Lopez of Ica, one of the cities hardest hit.
“The situation is dramatic, because many houses have collapsed and many people have died. It’s very difficult,” Bishop Brena told Catholic News Service by telephone Aug. 16.
More than 500 people are known to have been killed and 1,500 injured in the earthquake, which caused houses, shops and churches made of adobe to collapse. Rubble blocked streets in Chincha, Pisco and Ica, coastal towns along the Panamerican Highway between about 125 and 185 miles south of Lima, the Peruvian capital.
“The only good thing was that it occurred a little after 6 p.m., and many people were in the streets, or were indoors but were able to get out,” Bishop Brena said.
“The immediate needs are food and water. The water supply depends on electricity, so if we have no electricity there will be no water,” he said. “We need water, food, blankets and tents, because unfortunately not even the civil defense agency was prepared. People are sleeping in the streets and plazas.”
Although the climate on Peru’s south coast is warm during the day, temperatures can dip into the 50s at night.
Constant aftershocks made people jittery. Bishop Brena said residents of Ica had felt more than 140 smaller tremors, and a magnitude 5.9 jolt rattled windows in Lima around 8:20 a.m. Aug. 17.
When he went out to inspect the damage Aug. 16, Bishop Brena learned of a woman who had gathered with five friends in her home to pray the rosary on the feast of the Assumption.
“The house collapsed and all six were killed,” he said.
People who were injured by falling walls or ceilings flooded into the few hospitals and clinics in the area, some of which were also damaged in the quake.
“Hospital service collapsed,” Bishop Brena told CNS. “In the case of people who are ill or injured, it’s disastrous. There are very few doctors, there is no electricity, and people keep arriving (at hospitals). It has been impossible to assist all of them.”
Some of the most seriously injured patients were evacuated to Lima, where blood-donation stations were set up at public hospitals and private laboratories.
In Pisco, “80 percent of the adobe houses have fallen,” Bishop Brena said. The city’s largest church, the Church of St. Clement, collapsed while Mass was being celebrated, “crushing many people,” he said. “They think 20 or 30 people died there.”
Three people were killed in the Church of St. Francis of Assisi in a beach area of Pisco, and six reportedly died in the sanctuary of the Lord of Luren in Ica, the site of a popular religious devotion.
Traffic on the Panamerican Highway was snarled by huge fissures in the road and a collapsed bridge. Government ministers flew to the area to survey the damage, and workers labored to restore power.
Most of the attention was on the towns, however, and information about the extent of damage in rural villages– where virtually all houses are made of adobe – was only beginning to trickle in.
“We are trying to reach the people in greatest need through the parishes,” the bishop said. “In many areas, there is still no transportation.”
Gasoline was scarce because there was no electricity to operate pumps.
Medicine, nurses and doctors are needed “especially in areas that are farther away,” he said. “The hospitals have opened their doors, but the poorest people have no way to get there.”
He said the long-term effects of the quake will only become apparent over time. Families will need help rebuilding their homes and businesses, and even burying the dead, and “many young people have been traumatized,” Bishop Brena told CNS.
“This is a difficult moment for us,” he said, “but we hope that with the help of God and with solidarity we can get on our feet again.”