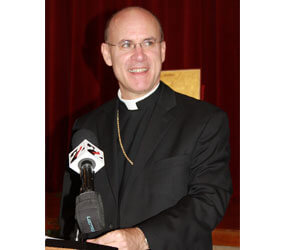 WASHINGTON – Pope Benedict XVI has named Bishop Jerome E. Listecki of La Crosse, Wis., to be the archbishop of Milwaukee and Bishop Kevin C. Rhoades of Harrisburg, Pa., to be the bishop of Fort Wayne-South Bend, Ind.

Bishop Rhoades is a graduate and the former rector of Mount St. Mary’s Seminary in Emmitsburg.

The pope also accepted the resignation of Bishop John M. D’Arcy, who has headed the Diocese of Fort Wayne-South Bend since 1985. He is 77 years old, two years past the age at which canon law requires bishops to turn in their resignation.

The appointments and resignation were announced in Washington Nov. 14 by Archbishop Pietro Sambi, apostolic nuncio to the United States.

In Milwaukee Archbishop Listecki, 60, succeeds Archbishop Timothy M. Dolan, who was appointed to head the New York Archdiocese in February.

Bishop Rhoades, who will turn 52 Nov. 26, succeeds Bishop D’Arcy, who earlier this year was at the forefront of strong criticism of the University of Notre Dame in South Bend for inviting President Barack Obama to give the commencement address and its decision to give him an honorary degree.

Critics of Obama, including dozens of bishops, said his support of legal abortion and embryonic stem-cell research made him an inappropriate choice to be commencement speaker at a Catholic university and to receive an honorary degree.

In a statement about his appointment, Archbishop Listecki said he regretted having to leave the La Crosse Diocese but was humbled by the pope’s appointment and looked forward “to responding to the challenges presented by the Archdiocese of Milwaukee.”

“The priests, religious, deacons, curial staff and lay faithful of the Diocese of La Crosse have made me a better man, a more faithful priest and hopefully a good bishop,” he said. “I ask forgiveness of any that I may have offended in my years as the bishop of the diocese, and I beg for your continued prayers that I may faithfully fulfill our Lord’s mission for the good of his church.”

Archbishop Listecki, a native of Chicago, was ordained a priest for the Archdiocese of Chicago in 1975. He was named an auxiliary bishop of Chicago in 2000 and appointed to La Crosse in 2004.

He holds degrees in civil and canon law and is a retired lieutenant colonel in the U.S. Army Reserves. He will be installed in early January.

Bishop Rhoades said in a statement it will not be easy for him to bid farewell to his home Diocese of Harrisburg, where serving “has been a tremendous blessing.”

“My greatest joys as bishop have been in being with the people, teaching the faith and celebrating the sacraments,” he said. “I am looking forward to visiting the parishes, schools and other communities of my new diocese.”

He thanked Bishop D’Arcy for his warm welcome to the Fort Wayne-South Bend Diocese.

At a South Bend press conference, Bishop Rhoades told reporters he was not concerned about lingering tension with Notre Dame over the Obama controversy.

“Let’s move to the future. I love Notre Dame. I want to have a close personal and pastoral relationship. It’s such a strong place,” he said, according to a story in the South Bend Tribune daily newspaper.

He noted that Bishop Rhoades has experience in higher education, as a former faculty member, seminary rector and vice president in Emmitsburg. The future bishop was in Emmitsburg when he was named to Harrisburg in 2004.

Born in Mahanoy City, Pa., he was ordained a priest in July 1983 by then-Auxiliary Bishop William H. Keeler of Harrisburg.

He served in parish ministry and also worked with Spanish-speaking Catholics. He was assistant chancellor of the Harrisburg Diocese 1988-90, then was pastor of St. Francis of Assisi Parish in Harrisburg. In 1997 he went to Emmitsburg.

Bishop D’Arcy has been bishop of Fort Wayne-South Bend since 1985. A native of Brighton, Mass., he was ordained a priest for the Archdiocese of Boston in 1957. He was a Boston auxiliary bishop, 1974-85.

He told reporters it was a “testament to the regard the Holy Father has for this diocese to send us someone who’s had five years as a bishop of a diocese larger than this.”

Bishop D’Arcy said he was leaving with “a touch of sadness. I’ve loved being bishop here, every moment of it.”

In a recent article in America, Bishop D’Arcy wrote about reaction to Obama’s appearance at Notre Dame, saying the controversy was not about the president, a replay of the 2008 elections or “whether it is appropriate for the president of the United States to speak at Notre Dame or any great Catholic university on the pressing issues of the day.”

“This is what universities do,” he said. “No bishop should try to prevent that.”

The central question, Bishop D’Arcy said, is: “Does a Catholic university have the responsibility to give witness to the Catholic faith and to the consequences of that faith by its actions and decisions – especially by a decision to confer its highest honor?”

Bishop D’Arcy said that, in his 24 years as head of the diocese in which Notre Dame is located, “I have never interfered in the internal governance of Notre Dame or any other institution of higher learning within the diocese.”

But he said a bishop “must be concerned that Catholic institutions do not succumb to the secular culture, making decisions that appear to many, including ordinary Catholics, as a surrender to a culture opposed to the truth about life and love.”

The Diocese of Fort Wayne-South Bend has a population of more than 1.2 million people, with 157,703, or 12 percent, of them Catholic.

The Archdiocese of Milwaukee has a population of about 2.3 million people, with 643,775, or 26 percent, of them Catholic.