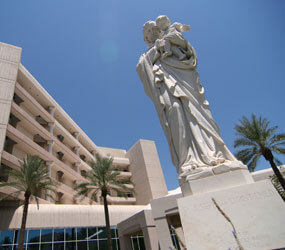 PHOENIX – St. Joseph’s Hospital and Medical Center in Phoenix can no longer identify itself as “Catholic,” Bishop Thomas J. Olmsted announced during a Dec. 21 news conference in Phoenix at the Diocesan Pastoral Center.

The Phoenix bishop issued a decree revoking the 115-year-old hospital’s affiliation with the Catholic Church. In the decree, the bishop wrote that he could not verify that the hospital provides health care consistent with “authentic Catholic moral teaching.”

He said it was his duty to strip St. Joseph’s Hospital of its Catholic identity because its leadership, as well as that of its parent organization, San Francisco-based Catholic Healthcare West, is not committed to “following the teachings of the Catholic Church.”

Linda Hunt, president of St. Joseph’s, said in a statement after the bishop’s news conference that the hospital was “deeply disappointed” by the action but would “continue through our words and deeds to carry out the healing ministry of Jesus.”

In May, officials at St. Joseph’s publicly acknowledged that an abortion occurred at the hospital in late 2009.

“Consistent with our values of dignity and justice, if we are presented with a situation in which a pregnancy threatens a woman’s life, our first priority is to save both patients,” Hunt said in her statement. “If that is not possible, we will always save the life we can save, and that is what we did in this case.

“We continue to stand by the decision, which was made in collaboration with the patient, her family, her caregivers and our ethics committee,” she added. “Morally, ethically and legally we simply cannot stand by and let someone die whose life we might be able to save.”

Sister Carol Keehan, a Daughter of Charity who is president and CEO of the Washington-based Catholic Health Association, also defended the hospital’s action in a “heartbreaking situation” and said personnel there “carefully evaluated the patient’s situation and correctly applied” the “Ethical and Religious Directives for Catholic Health Care Services,” to which all Catholics hospitals in the United States are required to adhere.

She said Catholic Healthcare West has a “long and stellar history in the protection of life at all stages.”

But Bishop Olmsted said in an interview with his diocesan newspaper, The Catholic Sun, that his action also was related to the hospital’s participation in the Mercy Care Plan, which provides health care through Arizona’s Medicaid program, and to the fact that Chandler Regional Hospital, also affiliated with Catholic Healthcare West, has not complied with the directives for many years.

“I have continued to insist that this scandalous situation needed to change,” the bishop said. “Sadly, over the course of these years, CHW has chosen not to comply.”

Through its involvement in the Mercy Care Plan, the bishop said Catholic Healthcare West has been responsible for a litany of practices in direct conflict with Catholic teaching. These include: contraceptive counseling, provision of various forms of contraception, voluntary sterilization and abortions “due to the mental or physical health of the mother or when the pregnancy is the result of rape or incest.”

“One could say that some of the administrators sincerely did not know what was in the government contracts with Mercy Care Plan,” he told The Catholic Sun. “However, they have an obligation to know. They would not sign a contract in which they were unclear about finances or some other dimension. They have an obligation with anything dealing with such delicate matters as life and death.”

Bishop Olmsted said Catholics “are free to seek care or to offer care at St. Joseph’s Hospital. But I cannot guarantee that the care provided will be in full accord with the teachings of the church.”

Hunt said at a Dec. 21 news conference that the hospital is required by state law to “provide family planning benefits.”

“But since the very beginning, these have been administered by third-party administrators,” she added. “We do not have any type of billing or any type of process that we get involved in with that. So it’s a different set of providers, a different entity that takes care of that for us.”

Bishop Olmsted, explaining his authority to revoke the Catholic identity of St. Joseph’s Hospital, cited Canon 216, which states: “No undertaking is to claim the name Catholic without the consent of competent ecclesiastical authority.”

“I have hoped and prayed that this day would not come,” the bishop said. “However, the faithful of the diocese have a right to know whether institutions of this importance are indeed Catholic in identity and practice.”

“I don’t think anyone could fairly say that I rushed judgment,” he told The Catholic Sun. “It’s not something I wanted to happen. The opposite is what I wanted. I wanted to have rigorous Catholic health care that’s in accord with the church’s teaching. That requires cooperation and a desire to be in full communion with the church. That was never guaranteed to me.”

The Archdiocese of San Francisco said in a Dec. 21 statement that Bishop Olmsted has authority over Catholic hospitals in his diocese, but “some questions have been raised about the implementation” of the directives by the San Francisco-based Catholic health system.

Archbishop George H. Niederauer of San Francisco “intends to initiate a dialogue” with the Catholic Healthcare West leadership regarding those questions, the statement said.

The withdrawal of a hospital’s Catholic identification is not without precedent.

Bishop Robert F. Vasa of Baker, Ore., announced in February that St. Charles Medical Center in Bend had “gradually moved away” from the church’s ethical directives and can no longer be called Catholic.

As a result of that decision, Mass is no longer celebrated in the hospital’s chapel and all items considered Catholic were removed from the hospital and returned to the church. The hospital retained the St. Charles name and a cross remains atop the building.