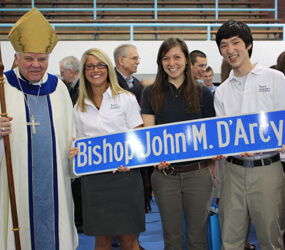 WASHINGTON – Saying that the president of the University of Notre Dame has offered “a flawed justification” for the decision to invite President Barack Obama to speak and receive an honorary degree at commencement, the local bishop urged action to “heal the terrible breach which has taken place between Notre Dame and the church.”

Bishop John M. D’Arcy of Fort Wayne-South Bend, Ind., said in an April 21 statement that his office has received “over 3,300 messages of shock, dismay and outrage” about the university’s plans to honor Obama, “and they are still coming in.”

The bishop – in whose diocese Notre Dame is located – said Holy Cross Father John I. Jenkins, university president, had erred in saying that the U.S. bishops’ document on “Catholics in Political Life” did not apply in this case.

The 2004 document states: “The Catholic community and Catholic institutions should not honor those who act in defiance of our fundamental moral principles. They should not be given awards, honors or platforms which would suggest support for their actions.”

Critics of Obama said his support of legal abortion and embryonic stem-cell research make him an inappropriate choice to be commencement speaker at a Catholic university.

Father Jenkins has said the invitation to Obama “should not be taken as condoning or endorsing his positions on specific issues regarding the protection of human life, including abortion and embryonic stem-cell research.”

But Bishop D’Arcy, who has said he will boycott the May 17 commencement, said the public outcry shows that the invitation “has, in fact, scandalized many Catholics and other people of good will.”

“It seems that the action in itself speaks so loudly that people have not been able to hear the words of Father Jenkins, and, indeed, the action has suggested approval to many,” he added.

“It would be one thing to bring the president here for a discussion on health care or immigration, and no person of good will could rightly oppose this,” Bishop D’Arcy said. “We have here, however, the granting of an honorary degree of law to someone whose activities, both as president and previously, have been altogether supportive of laws against the dignity of the human person yet to be born.”

The bishop criticized Father Jenkins for consulting with other university presidents and other bishops about the interpretation of “Catholics in Political Life” while failing to consult “his own bishop who … is the teacher and lawgiver in his own diocese.”

“If there was any genuine questions or doubt about the meaning of the relevant sentence in the conference’s document, any competent canonist with knowledge of the tradition and love for Christ’s church had responsibility to inform Father Jenkins of the fundamental principle that the diocesan bishop alone bears the responsibility to provide an authoritative interpretation,” he said.

Bishop D’Arcy pledged to “work with Father Jenkins and all at Notre Dame to heal the terrible breach which has taken place between Notre Dame and the church.”

“It cannot be allowed to continue,” he added. “I ask all to pray that this healing will take place in a way that is substantial and true, and not illusory. Notre Dame and Father Jenkins must do their part if this healing is to take place. I will do my part.”

Asked to comment on the bishop’s statement, Dennis Brown, university spokesman, said, “As always, we will continue to speak privately with Bishop D’Arcy on this and other matters.”