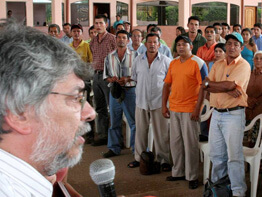 “I believe in collective leadership. … I’m no messiah,” Bishop Lugo, who is leading in opinion polls, told Catholic News Service in a telephone interview in mid-January. “Paraguay has a lot of very qualified people.”

He said Paraguay was “a champion in corruption,” but added, “there are very healthy people who are not tainted by it” and said he would like his running mate — whom he has yet to pick — to be a female politician.

With nearly 40 percent of Paraguay’s 6.5 million people living in poverty — and half of those poor struggling on $1 a day — plus rising inflation and Paraguay’s reputation as one of the most corrupt nations in the world, Bishop Lugo will have his work cut out if he succeeds in ending the Colorado Party’s six-decade grip on power in 2008.

Bishop Lugo made public his decision to seek the presidency on Christmas. He said his decision was the result of “a process of reflection” over his dissatisfaction with a traditional political model that “absolutely lacks credibility” and the fact that a series of movements, political parties and civic groups asked him to run for office.

His 30 years as a priest and bishop might not be typical training for public office. Though he studied sociology, politics and economics and ran a school in Paraguay after retiring from his diocese in 2005 for unspecified reasons, he said he has a lot to learn about tackling Paraguay’s problems.

“Canon law does not contemplate a political career,” he said.

The bearded, bespectacled Bishop Lugo, 55, who retains close ties to his former order, the Society of the Divine Word, said he found his life changed overnight after he submitted his resignation to the Vatican Dec. 18.

“It’s a very radical change to go into a wholly political environment, with meetings all the time. It’s a different rhythm,” he said.

After Bishop Lugo submitted his resignation, Cardinal Giovanni Battista Re, prefect of the Vatican’s Congregation for Bishops, wrote to remind him that running for public office would “be in clear contrast with the serious responsibility of a bishop of the Catholic Church called to promote and defend the unity of the church, its doctrine, worship and discipline.”

“In the name of Jesus Christ, I exhort you to reflect seriously on your behavior and on the effect this could have on you and on the church,” the cardinal wrote.

It is not yet clear whom Bishop Lugo will face in the election — President Nicanor Duarte Frutos is currently seeking congressional support to change Paraguay’s Constitution to allow him to seek a second consecutive five-year term.

Several potential opposition candidates have emerged, and Bishop Lugo said he was in constant conversations to discuss the prospect of leading a grand opposition coalition.

But with the electoral machine in the hands of the Colorado Party, he said he did not rule out logistical hurdles.

“I don’t rule out them contesting my candidacy,” he said. “They’ll find a motive.”