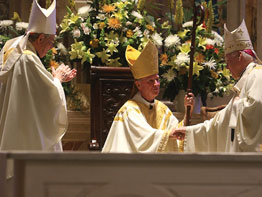 As joyful bells pealed from a tower and Bishop Malooly greeted well-wishers, longtime friends and those who saw the bishop for the first time said they were elated with their new leader.

“It’s a great day for the Diocese of Wilmington,” said Monsignor Richard W. Woy, pastor of St. John the Evangelist in Severna Park.

Monsignor Woy was one of more than 20 priests and deacons from the Archdiocese of Baltimore to attend the ceremony. Archbishop Edwin F. O’Brien, Cardinal William H. Keeler, Archbishop William D. Borders and Baltimore’s auxiliary bishops were also present.

Chris Barthold, a former parishioner of St. John the Evangelist, Columbia, who works as an assistant professor at the University of Delaware, was deeply moved by the pageantry of the liturgy.

“The timpani were striking and the sopranos were hitting the high notes,” said Ms. Barthold. “It was an amazing, amazing experience – once in a lifetime.”

Kim Zitzner, a Catholic campus minister at the University of Delaware, said she was delighted by her new bishop’s commitment to young people.

“He’s got a wonderful reputation, and he’s very warm,” said Ms. Zitzner, noting that the bishop will be visiting the University of Delaware to celebrate a student Mass during Catholic Students Week.

“He endeared himself to the people of Wilmington with his homily, his demeanor and a real loyalty to the church and fervor for its ministries,” Mr. Dowling said.

Deacon Charlie Hiebler, Bishop Malooly’s former assistant in the office of the western vicariate, said he was glad his former boss was received so warmly. Deacon Hiebler said Bishop Malooly’s openness to people “highlights what his life is all about.”

Austin Malooly, Bishop Malooly’s brother and a parishioner of St. Isaac Jogues in Carney, was touched by the large turnout of clergy.

Asked how his brother did, Mr. Malooly said, “I think he did good. He’s always relaxed and nothing seems to bother him. I’m sure he’ll do real well.”