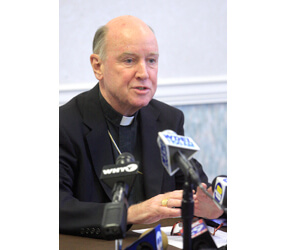 WILMINGTON, Del. – The “painful decision” to have the Diocese of Wilmington file for bankruptcy is “the best path to achieve healing, reconciliation and fair compensation for all the victims of child sexual abuse by clergy of our diocese,” Bishop W. Francis Malooly said Oct. 19.

Speaking at a press conference the day after settlement negotiations broke down with representatives of eight victims of abuse whose trial was scheduled to begin Oct. 19, the bishop said he had hoped and prayed that the Oct. 18 Chapter 11 reorganization filing under bankruptcy law was a decision he would never have to make.

“(But) we have a finite amount of resources” and it became clear from the dollar amounts being discussed in possible early settlements that the diocese “would never get through to 142 claimants in any fair or equitable way,” he said. The filing of bankruptcy halts lawsuits against the diocese.

Only the corporation known as the Diocese of Wilmington Inc. is seeking reorganization, not parishes, schools, religious orders or other organizations that have their own corporate identities.

Most of the 131 civil cases filed against the diocese came during a two-year window (July 2007 to July 2009) opened by Delaware’s 2007 Child Victims Act, which allowed individuals to file suits previously barred by the statute of limitations.

“Our hope is that Chapter 11 proceedings will enable us to fairly compensate all victims through a single process established by the bankruptcy court,” the bishop wrote in a letter to the people of the diocese. He also said the filing presents a way for the diocese “to continue our charitable, educational and spiritual missions and the ministries associated with them.”

The filing with the U.S. Bankruptcy Court for the District of Delaware came on the eve of a trial set to begin in Dover involving lawsuits against former diocesan priest Francis DeLuca.

Tony Flynn, the diocesan lawyer who attended the press conference, characterized the bankruptcy as “a settlement negotiation” that will result in a plan to distribute compensation to all 142 victims.

The diocese becomes the seventh Catholic diocese in the country to seek bankruptcy protection since the priest sex abuse scandal broke in 2002; the others are Portland, Ore.; Tucson, Ariz.; Spokane, Wash.; Davenport, Iowa; San Diego; and Fairbanks, Alaska. Davenport, Portland and Spokane have emerged from bankruptcy.

In May, Bishop Malooly reported that since the late 1980s the diocese has settled 19 cases out of court. Eleven were settled for $1.6 million before the national abuse scandal was reported in 2002. Between 2002 and last May, eight more cases were settled for $6.2 million, with insurance paying for $475,000. In total, settlement costs have been $7.8 million.

In his letter to Catholics of the diocese, the bishop said that “parishes in the Diocese of Wilmington are set up civilly and by state statute as separate corporations,” so they are not affected by the bankruptcy filing. Catholic Charities, Catholic Cemeteries, Catholic Youth Ministry and other separately incorporated church entities also are not included in the filing.

In a note to diocesan employees, the bishop said the diocese does not anticipate any impact on its employees as a result of the Chapter 11 filing. “We have sought and expect to receive court authority to continue paying employee wages and benefits based on current programs,” he said.

The Chapter 11 process now will play itself out in bankruptcy court, said Bob Brady, a bankruptcy attorney for the diocese. “One of the advantages to all creditors in the bankruptcy is the financial transparency. All the diocese’s finances will be laid bare and everyone will be able to see what’s available to creditors.”

The diocese in federal court will now have the obligation “to put forth a plan on how it proposes to compensate all its creditors, including the victims of sexual abuse,” Brady said. There will be a committee of creditors, he added, that will probably be who the diocese negotiates with to try to reach resolutions on diocesan payments to creditors and present that to the court.

“We hope to do it as quickly as possible,” Brady said. The debtor – in this case the diocese – has exclusive right to file a plan within the first 120 days, he said.

The bankruptcy process in other dioceses has taken as long as a year.

Noting the victims will have a right to petition to have their case continued in court, Brady said, “Our hope is that we offer them a more efficient and cost-effective way to resolve their claims as part of the bankruptcy. In the end, the judge’s determination will be what assets are available to pay all the creditors, including the victims.”

Bishop Malooly said parishes wouldn’t be asked to help contribute to compensation distributed through the Chapter 11 process. “We’re talking about a much greater need for resources than parishes would be able to provide for us,” he said.

The bishop said his overarching concern has been how to address the needs of the victims.

“It is our moral obligation to make reparations and otherwise see to the healing of legitimate abuse victims and to try to restore the faith that in many cases has tragically been lost,” he wrote in his letter announcing the decision. “But our moral obligations do not end there. We also are obliged to continue our charitable, educational and spiritual missions and the ministries associated with them. In order to do that, this diocese must survive.”