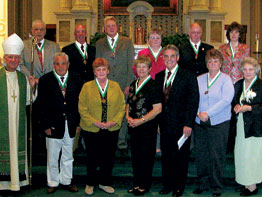 In an Oct. 28 prayer service and ceremony at St. Patrick in Cumberland, Bishop W. Francis Malooly, western vicar, recognized the outstanding service of 18 Catholics in the western region of the western vicariate by conferring on them the archdiocesan Medal of Honor. The medal is made of lucite with the coat of arms of the archdiocese on one side and flames of fire that represent the Holy Spirit and the words “love,” “service” and “disciple” on the other.

“It’s so energizing for me as I look and see how much service and how diverse the service is in the parishes,” said Bishop Malooly. “They become the ones imitating what Jesus did and they become a model for how we should be of service
to others.”

The honorees are:
Ginger Bean,
St. Gabriel, Barton
A parishioner of St. Gabriel in Barton for 50 years, Ms. Bean is a member of her parish’s chapter of The Catholic Daughters of the Americas and the Barton American Legion auxiliary. She has been an offertory collection counter at St. Gabriel for 22 years, and she worked as a receptionist at Moran Manor Nursing Home for 16 years.

Joseph Borgman, St. Mary of the Annunciation in Lonaconing
A lifelong parishioner of St. Mary, Mr. Borgman is a former altar boy who continues to serve at the altar today. He assisted the parish sexton, his uncle, in ringing the church bells at dawn, noon and dusk. Over the years, he has worked as a sacristan and volunteered helping with various chores in the parish.

Walter (deceased) and Rita Davis, St. Mary, Cumberland
Mr. Davis was well-known in Cumberland for making and distributing thousands of rosaries to missions everywhere and to numerous schools and churches. A daily participant
in Mass, he was an extraordinary minister of holy Communion who visited the homebound and nursing homes. Mrs. Davis also has served as an extraordinary minister of holy Communion, taking Communion to the nursing home. She leads the rosary before Mass on Saturday as well as once a week at the nursing home. She also has served as a catechist, and a member and officer of the parish council, the Mountain Maryland Regional Council, Martha’s Group and the sodality.

Margaret and Robert Foote Sr., St. Patrick, Cumberland
One of the leaders of the parish evangelization committee, Mr. Foote has been active in calling and inviting back to active participation those parishioners who have not been coming to church recently. He and others on the committee visit homes and seek new members for
the parish.
Mrs. Foote is the chairperson of the parish craft guild and spearheads the placing and staffing of the parish stand in the annual Cumberland Heritage Festival. The Footes also work together on the annual parish fall dinner and the Christmas and Easter candy sale.

Eugene Helmstetter, Ss. Peter and Paul,
Cumberland
A lifelong member of the parish Mr. Helmstetter serves as an extraordinary minister of holy Communion and as an usher. He has taken care of the maintenance of the parish buildings for the past 10 years – fixing leaking pipes, repairing furnaces and plowing snow.

Sue Hughes, St. Joseph, Midland
Ms. Hughes serves as a lector, an extraordinary minister of holy Communion and a member of the pastoral council who recently completed her term as council chair. She has been instrumental in inviting new faces to the parish sodality where she currently serves as president. Ms. Hughes is best known for her tireless behind-the-scenes efforts at social
and benefit events. She is famous for her spaghetti sauce and fudge.

Shirley and Harry King, St. Ambrose, Cresaptown
Mr. King has chaired the parish finance committee, Heritage of Hope campaign, the Cardinal’s Lenten Appeal, as well as the parish renovation fundraising committee. In addition, he has served as a leader of the RCIA program, a lector, an extraordinary minister of holy Communion and served on the ministry team for local prisons. Mrs. King has served as pastoral council secretary for two terms and chairperson of the development committee. The first parish carnival was conducted under her leadership, and she initiated soup sales and yard sales. She chairs the bereavement committee and is a leader in the parish vacation Bible program. Mrs. King has been involved in the RCIA program and worked in the prison ministry.

Mary Ernestine Lohr, St. Mary’s Church,
Cumberland
Ms. Lohr is a lector who has served on the pastoral council, sodality and the Martha’s Group. She is a member of the Sanctuary Society, where she puts her sewing skills to
work repairing altar clothes, vestments and more. Ms. Lohr also washes and irons the altar linens and helps count the weekly collection. She has served on many dinner committees and has been active on the Parent Teacher Association.

Brenda Matthews, St. Patrick, Mount Savage
Ms. Matthews has served as secretary to the Squirettes of Mary and has been involved in the parish outreach committee, adult faith formation and the sodality. As a catechist, she helped initiate the “Safe & Snug” drive for family reservation and has served as a sponsor for the RCIA. She most recently served as pastoral council president during the time of transition to the team of one staff of priests for the seven churches of Western Maryland.

Shirley Panther,
St. Peter the Apostle and
St. Peter at the Lake, Oakland
Ms. Panther has served as parish secretary without ever asking for compensation. For many years she has worked the parish bingo, and she is an active member in The Catholic Daughters of the Americas. Making sure that no one is left out or left behind, she has been very kind to provide transportation to Mass for older parishioners for many years.

Richard Puderbaugh, Ss. Peter and Paul,
Cumberland
A lifelong member of the parish, Mr. Puderbaugh serves on the pastoral council, the building and planning committee and is an extraordinary minister of holy Communion. He has donated many hours beautifying the parish grounds and repairing the parish’s buildings.

Joan and Joseph
Schultz, St. Peter the Apostle and St. Peter at the Lake, Oakland
Mr. and Mrs. Schultz serve as extraordinary ministers of holy Communion and have worked to organize, plan and cook at the parish picnic as well as the parish bingo. During Lent they order supplies, set up the hall and cook the fish dinners. They also help clean up after parish events.

Thelma (Tillie)
Skipper, St. Peter the Apostle and St. Peter at the Lake, Oakland
Mrs. Skipper, along with her deceased husband, worked bingo every week. Because of their hard work, the parish was able to put in sidewalks around the church and install new carpeting in the church. Mrs. Skipper also has served on the funeral luncheon committee.

Vic Unnone,
St. Michael, Frostburg
Mr. Unnone currently serves on the pastoral council, liturgy, bereavement and maintenance committees. He is very active in the Knights of Columbus, serving as Grand Knight of the Frostburg Council 1442, Knights of Columbus, and currently holds the position of district warden. He is a longtime member of the choir, a cantor and lector, a sacristan for parish funerals and is an extraordinary minister of holy Communion. Mr. Unnone, along with his wife, Ann, chair the annual turkey and ham dinner and also chair St. Michael School’s monthly fish dinners.