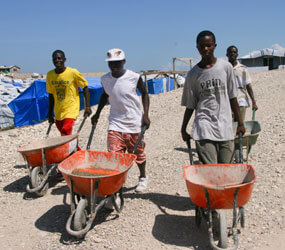 Whether it was local citizens using wheelbarrows to haul off rubble or holding an umbrella to protect the body and blood of Christ at Mass during a downpour that broke through a tent, there is much about the spirit of the Haitian people that inspires Bishop Denis J. Madden.

The Archdiocese of Baltimore auxiliary spent three days in and around Port-au-Prince during the second week of August, seven months after the capital city was devastated by an earthquake that took the lives of an estimated 300,000 and left many more homeless.

Bishop Madden accompanied a team from Baltimore-based Catholic Relief Services that included Ken Hackett, its president, and New York Archbishop Timothy M. Dolan, the chairman of CRS’ Board of Directors.

“One of the impressions I came away with is the great resiliency of the people,” Bishop Madden said. “Another is the great faith of the people.
“We celebrated Mass in a tent city (Accra Camp). There was singing, dancing, waving of hands, such joy on the faces of the people. There came a huge downpour and despite being under a tent, people got soaked. Someone held an umbrella over the altar. It was the most wonderful liturgy.”

Bishop Madden observed the construction of transitional shelters, welcome progress in a nation that was in disarray prior to the earthquake and where the removal of demolition detritus involves menial labor.

“CRS is going to build 8,000 temporary houses on this one site,” Bishop Madden said. “The idea is to build on the spot where people lived. CRS lets people know that if they can clear the site where their house was, and throw the rubble in the street, it can rebuild.

“It was a sight to behold, men and women of all ages, in blue hard hats that read ‘CRS,’ using their wheelbarrows to clear the rubble dumped in the streets.”

“In one sense, you’re prepared, having seen so much on the news,” Bishop Madden said of his first trip to the most impoverished nation in the Western Hemisphere. “Then you’re walking through a camp and seeing trenches that are supposed to be for runoff water being used for anything …”

The lack of an existing infrastructure makes the work of CRS and all relief agencies in Haiti more challenging.

“Can you build – not rebuild – an educational system?” Bishop Madden said. “Can you build a medical system? Training is going to be crucial. We have to utilize the talents of the people. ”