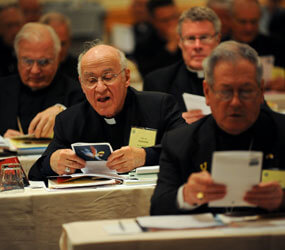 WASHINGTON – Pope Benedict XVI has accepted the resignation of Bishop Victor B. Galeone as head of the Diocese of St. Augustine, Fla., and appointed Auxiliary Bishop Felipe de Jesus Estevez of Miami to succeed him.

Bishop Galeone began his ministry in the Archdiocese of Baltimore.

Bishop Estevez, a 65-year-old native of Cuba, is one of 26 Hispanic bishops serving in the United States and will become the 13th among active Hispanic bishops to head a diocese or archdiocese.

Bishop Galeone, 75, has headed the Diocese of St. Augustine since 2001. He had submitted his resignation to the pope at age 75, as required by canon law.

A native of Philadelphia, Bishop Galeone moved with his family to Baltimore in 1941. Following studies at the Gregorian in Rome, where he earned a bachelor’s and licentiate in theology, he was ordained a priest of the Archdiocese of Baltimore on Dec. 18, 1960.

He also holds a master’s degree in education from what is now Loyola University Maryland.

Bishop Galeone was an associate pastor in the archdiocese, served as principal of St. Paul Latin High School and was pastor of St. Thomas More in Baltimore and St. Agnes in Catonsville.

His resignation and the appointment of Bishop Estevez were announced in Washington April 27 by Archbishop Pietro Sambi, apostolic nuncio to the United States.

Bishop Estevez will be installed as head of the St. Augustine Diocese June 2 at St. Joseph Catholic Church in Jacksonville.

At an April 27 news conference in Jacksonville, Bishop Estevez said his new diocese “is a land where the story of the first evangelization of North America finds its heroic beginnings” and “a land where ingenious pastoral practices developed to meet the people in their culture, multiple languages and races.”

“For many years, I have come to this diocese as a pilgrim in search of its roots, walking on ancient streets and embracing anew its magnificent stories,” he said.

Bishop Galeone welcomed his successor, describing him as “a man of vision” and “a good listener as well as a healer, capable of uniting parties that are on opposite ends of a divisive matter.”

“Furthermore, his calm demeanor and consummate charity … bespeak a man of great kindness who is rock solid in his personal faith in Our Lord, his strong faith in the church and his unflinching loyalty to the Holy Father,” he added.

Born Feb. 5, 1946, in Havana, Bishop Estevez came to the United States through Operation Peter Pan, which brought 14,000 unaccompanied minors from Cuba, and finished his high school studies in Indiana.

He was ordained a priest of the Diocese of Matanzas, Cuba, in Fort Wayne, Ind., on May 30, 1970, and served as a missionary in Honduras until 1975. He was incardinated into the Archdiocese of Miami in 1979.

He served as a faculty member (1975-77), rector (1980-86) and dean of spiritual formation (2001-03) at St. Vincent de Paul Regional Seminary in Boynton Beach, Fla., and as pastor of St. Agatha Parish in Miami and director of campus ministry at Florida International University in Miami from 1987 to 2001.

He was made a prelate of honor, with the title “monsignor” in 1981 and named an auxiliary bishop of Miami in 2003.

The St. Augustine Diocese covers 11,032 square miles and includes nearly 2 million people, of which 171,000, or 9 percent, are Catholics.