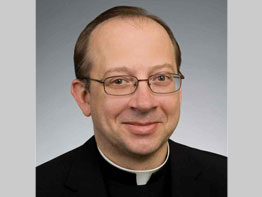 WASHINGTON – Follow the apostles’ mission of bringing the “saving power of Christ into this world” by teaching the faith to others, Archbishop Donald W. Wuerl urged new Auxiliary Bishop Barry C. Knestout Dec. 29.

The Washington archbishop also offered words of inspiration during Bishop Knestout’s episcopal ordination Mass at the Cathedral of St. Matthew the Apostle, as 1,200 guests listened.

Archbishop Wuerl noted that Bishop Knestout, 46, had chosen “Christ Our Hope,” the theme of Pope Benedict XVI’s April 2008 U.S. visit, as his episcopal motto. Then-Monsignor Knestout served as co-chairman of the papal visit committee in Washington.

“As Pope Benedict XVI taught us in his encyclical, ‘Spe Salvi’ (on Christian hope), and as he repeated here in our archdiocese at the Mass at Nationals Park on April 17, ‘the one who has hope lives differently. The one who has hope has new life,’ ” Archbishop Wuerl said.

“May you show that joy of ministry that clearly radiated from the face of Pope Benedict throughout his time here in this nation and our archdiocese. While we still have much to do, we live in hope because we know and rejoice in the wisdom that Christ has already overcome the world,” the archbishop added.

The new bishop is a native of the Washington Archdiocese, having grown up in Pope Pius X Parish in nearby Bowie, Md. Bishop Knestout became the first native of Prince George’s County to be ordained a bishop for the archdiocese, which includes the nation’s capital and five surrounding Maryland counties.

He currently serves as the archdiocese’s moderator of the curia (chief of staff) and vicar for administration. He previously headed its Office of Youth Ministry and served as a priest secretary to the late Cardinal James A. Hickey and then to Cardinal Theodore E. McCarrick, when each served as archbishop of Washington, in addition to serving as a parish priest in the years following his 1989 ordination.

“This ordination today has special meaning for the church of Washington,” Archbishop Wuerl said. “The bishop we ordain today comes also as a native son of the archdiocese – one who received the faith and was formed in it here and who already brings a sense of continuity with its pastoral life.”

Bishop Knestout’s mother, Caroline, and all eight of his brothers and sisters and several nieces and nephews attended the Mass. His brother, Father Mark Knestout, director of the archdiocese’s Office of Worship, served as Bishop Knestout’s master of ceremonies during the ordination and helped coordinate the planning for the Mass.

In remarks after Communion, Bishop Knestout thanked his family for their love and support, especially thanking his parents for their example. His father, Deacon Thomas Knestout, died in 1997. His mother is a retired nurse and attends Mass daily.

Addressing his mother, the new bishop said, “You and Dad have given your children the most precious gift you could give – faith – and that continues to bear fruit.”

Bishop Knestout also asked people to pray for him “that I might be an effective instrument of his faith, his joy and his hope. … May God be in our hearts and give us the joy and hope of Christ this Christmastime and always.”

He thanked his brother priests for their support, pointing out “what wonderful brothers they are.” He praised the example of Cardinal Hickey, whom he served as priest secretary from 1994 until the cardinal’s death in 2004. He said he was honored to serve Archbishop Wuerl. “He serves this church with courage and dedication. He’s a wonderful shepherd,” he said.

The new bishop also thanked his coworkers in the archdiocese for their help. “I feel filled with God’s grace today,” he said.