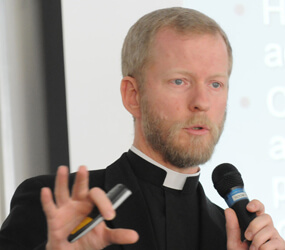 DENVER – A slate of Catholic medical ethicists sought to provide clear Catholic answers to complex health care decisions during a gathering in Denver.

The Oct. 2-3 seminar in Catholic bioethics for health care professionals, clergy and teachers was held at the John Paul II Center in south Denver.

The seminar was sponsored by the National Catholic Bioethics Center, located in Philadelphia, in collaboration with the Denver guild of the Catholic Medical Association. Topics included beginning-of-life and end-of-life issues; Catholic health care at the service of the human person; ethical approaches to complications before and after birth; and stem-cell research.

For more than three decades, the bioethics center has been hosting events for health care professionals to increase awareness and analyze complex ethical dilemmas found in clinical settings.

“Fundamentally we’re looking at the ‘Ethical and Religious Directives for Catholic Health Care Services’ and to gain an understanding how the church approaches what is considered to be ethically good and in the best interest of those who we serve,” Haas told the Denver Catholic Register, archdiocesan newspaper.

“The Catholic approach looks to the nature of the human person as an objective criterion,” he said. “It allows us to determine what is most in accord with human nature and therefore what is most appropriate for the human being.”

Haas said there is a great deal of interest on the subject of bioethics.

“In many ways you could say it’s an area in which the great drama of our day, in terms of understanding the human person, is being played out,” he said. “Look at embryonic stem-cell research. We’re grappling with what a human being is and what our proper response to a human being should be. Today we’re dealing with situations that would have been considered science fiction when George Orwell wrote ‘1984.’“

In a presentation on contraception, sterilization and natural family planning, Haas said the directives of the church are straightforward and clear.

“Catholic health institutions may not promote or condone contraceptive practices but should provide, for married couples and medical staff, instruction both about the church’s teaching on responsible parenthood and in methods of natural family planning,” he said.

Father Pacholczyk, director of education at the National Catholic Bioethics Center and author of the column “Making Sense of Bioethics,” pointed out several myths that recur in the ongoing stem-cell research debate, including: stem cells can only come from embryos; the church is against stem-cell research; and embryonic stem-cell research has shown the greatest promise.

“The fact is that stem cells can be taken from umbilical cords, the placenta amniotic fluid and organs,” he told the audience. “And of the four categories of stem cells – embryonic stem cells, embryonic germ cells, umbilical-cord stem cells and adult stem cells – the only one the church opposes is embryonic.”

He then showed a slide listing 30 different diseases that have been successfully treated by umbilical-cord stem cells and said, “This list is growing all the time.”

Next he asked the audience if they knew how many diseases have been successfully treated through embryonic stem cells. “Zero!” he announced.

Father Pacholczyk recalled a member of one government panel asking him about why he should be concerned about embryos.

“I told him as a former embryo myself, I have strong opinions on how they should be treated,” he said.