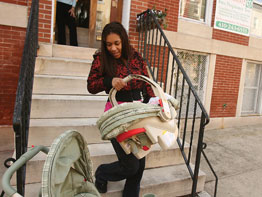 Pro-life leaders and advocates for pregnant women are outraged by the introduction of two bills in Annapolis they say will have a “chilling effect” on the outreach efforts of crisis pregnancy centers across the state.

Senate Bill 690, introduced by Sen. Richard Madaleno Jr. of Montgomery County and House Bill 1146, sponsored by Del. Roger Manno of Montgomery County, would force crisis pregnancy centers to tell women who contact them that the centers are “not required to provide factually accurate information to clients.”

The legislation seems to have been sparked by a recent “investigation” by the NARAL Pro-choice Maryland asserting that crisis pregnancy centers give out inaccurate or misleading information to clients.

Nancy Paltell, associate director for the respect for life office of the Maryland Catholic Conference, said the report is part of a coordinated smear campaign by NARAL against crisis pregnancy centers.

“The data in the so-called report has no value,” said Ms. Paltell, noting that there are 40,000 client visits to crisis pregnancy centers every year.

“All NARAL has is 11 anecdotes,” she said. “There are tens of thousands of people who are served with love and care at crisis pregnancy centers.”

While NARAL takes umbrage when crisis pregnancy centers inform clients about the development of their unborn babies, Ms. Paltell said women have a right to be fully informed before making a decision about abortion. That includes knowing about fetal development and possible medical risks associated with abortion, she said.

While NARAL may suggest otherwise, when women visit crisis pregnancy centers, they are not being tricked or duped into having their babies, Ms. Paltell said.

“They help remove obstacles to childbirth,” she explained. “Why try to make it harder to deliver needed services?”

Ms. Paltell said she was concerned about the bill’s reference to “factual information.”

“Who decides what is factual information and what isn’t?” said Ms. Paltell. “It’s a factual statement to say there are risks associated with having an abortion. Women have a right to know those risks.”

Pregnancy resource centers do not provide nor do they claim to provide abortions or abortion referrals, Ms. Paltell said. They are not family planning clinics. Through an extensive referral system, they help women navigate the state’s social-service system and access the medical services provided by local health departments. Most pregnancy centers do not provide medical services and say so in their literature, according to an information sheet published by the MCC.

NARAL held a Feb. 20 media teleconference to discuss its report. When The Catholic Review requested the access code to participate, a reporter was told by a NARAL official that the event was by invitation only and barred the newspaper from participating.

In a Feb. 25 interview with The Catholic Review, Ariana Kelly, executive director of NARAL Pro-Choice Maryland, acknowledged that the report was not scientific and was only a collection of anecdotes.

“All we have done is present the stories of our investigators,” she said.

Ms. Kelly said the purpose of NARAL-supported legislation is to make sure crisis pregnancy centers are honest about what they offer.

Carol Clews, executive director of the Greater Baltimore Center for Pregnancy Concerns (GBCPC), which has offices on St. Paul Street in Baltimore and on the campuses of St. Brigid in Canton and St. Rita in Dundalk, said crisis pregnancy centers help women make informed pregnancy decisions.

“We are committed to caring for clients with absolute integrity as we have done for almost 30 years,” she said. “Our services have been tremendously beneficial to the families in our community.”

The GBCPC, one of about 40 crisis pregnancy centers in Maryland, serves about 1,000 clients a year and receives about 4,000 calls on its help line. It offers pregnancy tests, peer counseling, parenting classes, maternity and infant supplies and referrals to community resources.

Ms. Clews said her counselors “tell the truth” to clients. The center is supervised by a medical doctor and a nurse is on staff, she said.

Ebony Harris, a 28-year-old client of GBCPC, said she was ready to have an abortion before she turned to GBCPC for help. With assistance, she is now the proud mother of an 18-month-old son. When she called for help, Ms. Harris said she would have hung up the phone if she had been told the crisis pregnancy center was not required to give factual information.

“I would have thought that what was being told to me was a lie,” she said.

Ms. Harris said counselors at GBCPC informed her about what happens in the development of a baby, while making it clear that it was her choice whether to have her baby. She was offered post-abortion counseling services if she decided to go through with the abortion, she said.

“I just wanted to talk to someone because I didn’t want to have an abortion but I was being pressured to have one,” she remembered. “The people at the pregnancy center cared about me. You could feel it the moment you walk in the door.”

Ms. Harris said she is very upset by the proposed legislation.

Sen. Madaleno did not respond to requests for an interview with The Catholic Review. Del. Manno returned a Catholic Review phone call but could not be reached before deadline.