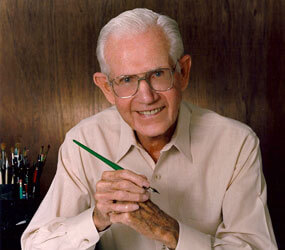 WASHINGTON – Bil Keane, the Catholic cartoonist who originated the comic strip “The Family Circus” more than 50 years ago, died Nov. 8 at age 89 in Paradise Valley, Ariz., near Phoenix. The cause of death was given as congestive heart failure.

Born William Aloysius Keane in Philadelphia, he taught himself to draw while a student at Northeast Catholic High School in Philadelphia. He got his first cartoon published in 1936 on the amateur page of the Philadelphia Daily News.

But the urge to do cartoons started even earlier. While a sixth-grader at St. William School in Philadelphia, Keane drew a picture of his teacher, an Immaculate Heart of Mary sister named Sister Ann. When she caught a glimpse of his art, though, she responded in a way no one expected: She decided the class needed its own newspaper and Keane should be editor. Sister Ann also told Keane that she’d pray for his future success as a cartoonist.

He omitted the second “L” from “Bill” early in his career “just to be different,” he told Catholic News Service in a 2002 interview.
Keane served in the Army 1942-45, drawing for Yank magazine and later for the Army’s newspaper, Stars and Stripes. While serving in Australia, he met his future wife, Thelma, the inspiration for “Thel” in “The Family Circus.”

Returning to Philadelphia after his military service, he got a job with the Philadelphia Bulletin daily newspaper, first doing a comic strip called “Silly Philly” and later “Channel Chuckles.”

After the Keanes moved to Arizona, Bil Keane came up with the idea for “The Family Circus.” Originally called “The Family Circle” until Family Circle magazine objected, the single-panel comic retained its circular shape even after the dust-up over the name settled.

In 1992, Keane won the Elizabeth Ann Seton Award from the National Catholic Educational Association for his “steadfast commitment to a Catholic way of life and his steadfast promotion of strong family values to his 100 million daily readers.”

He returned the favor by illustrating Catholic Schools Week posters for the NCEA in the 1990s. Even now, a 2011-12 NCEA calendar features a dozen Keane “Family Circus” illustrations from past NCEA national marketing campaigns. The NCEA’s poster for its 2012 convention also features a Keane illustration.

Keane illustrated the 1992 book “Holy Hilarity” from the Fellowship of Merry Christians. He also made “Family Circus” illustrations for the annual student subscription campaign of The Catholic Standard & Times, newspaper of the Archdiocese of Philadelphia.

“I’m always happy to do it because I feel I’m using my God-given talent to help others (and) convey to people the benefits of a good Christian life,” Keane once told The Catholic Standard & Times.

“The Family Circus,” long known for its squeaky-clean humor has been satirized. “The fact is that ‘The Family Circus’ is popular and has such wholesome, family values. So if you’re going to satirize those values, ‘Family Circus’ is the one to pick on,” Keane told St. Anthony Messenger magazine in a 2001 interview.

The comic also is known for its occasional religious themes. While the worship depicted in “The Family Circus” is of a generic Christian nature, Keane told St. Anthony Messenger it came from the family’s long connection to the Catholic Church. “I draw out of my lifestyle,” Bil said. “I grew up Catholic, my kids grew up Catholic.”

Keane and Thelma, who died in 2008, had five children. Son Jeff, who collaborated with Keane in the early 1980s on a comic strip called “Eggheads,” later worked alongside his father on “The Family Circus,” first completing his father’s sketches and now drawing the strip from start to finish.

Bil Keane said “The Family Circus” was based on his children’s antics. But as they grew up, Keane told the NCEA in a 2002 speech, he looked to his nine grandchildren for inspiration. “My kids and grandkids think I’m following them around lovingly, but really I’m out to exploit them,” he joked.