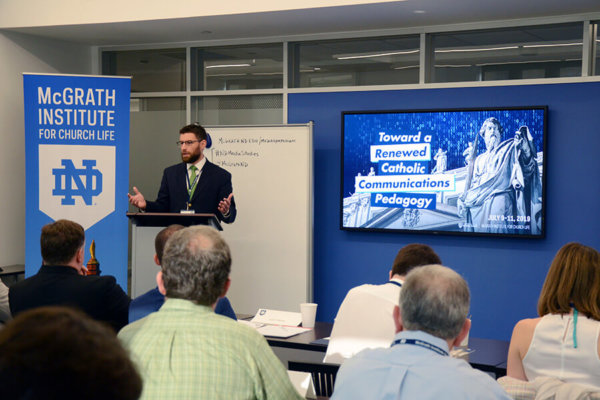 SOUTH BEND, Ind. (CNS) — As politicians around the world scrutinize how Facebook, Google and Amazon mine user data for commercial purposes, Catholic leaders are studying ways to spread the Gospel through digital media.

“Despite all of this technological progress, it is not clear that we’ve kept pace in our ability to understand media’s social, psychological and ethical consequences,” said Brett Robinson, communications director for the McGrath Institute for Church Life at the University of Notre Dame and author of “Appletopia: Media Technology and the Religious Imagination of Steve Jobs.”

A symposium hosted by the McGrath Institute July 9-11 brought together a panel of internationally recognized Catholic intellectuals and communications practitioners to propose responses to the challenge.

“The interior senses of the human soul are being formed by our exposure to new media techniques, so the church and the university must ask: ‘Formed for what?'” Robinson said in his opening address to the conference.

Robinson said he had invited experts in fields as diverse as theology, philosophy, literature, media studies, political philosophy, rhetoric and sociology because, “despite these diverse backgrounds, I think we share a common task, which is how to extend the gifts and riches of the church’s intellectual tradition into the digital age.”

One challenge to having a receptive audience to the Catholic intellectual tradition is the diminished attention spans of modern smartphone users.

“On Instagram, you can find people posting images of text that people have to read,” which could direct users to longer form articles and “something healthier,” he said.

Read Schuchardt, an Anglican who teaches communications at Wheaton College in Illinois, said religious renewal often happens in tandem with a renewal in media technology, even in the Bible.

“There is no religious revolution without a media revolution,” he said, citing examples from the Old Testament.

For instance, Moses gave up hieroglyphics for Proto-Sinaitic script, a precursor to Hebrew, in the process of turning from Egyptian polytheism to the one God of Abraham, Isaac and Jacob, Schuchardt said.

He said he encourages his communications students to leave the world of media consumption in order to be more proficient at producing effective media.

“For students who say, ‘I want to be a filmmaker,’ ‘I want to be a musician,’ ‘I want to use these tools,’ I say, ‘Perfect, because in order to be good at anything you have to have 10,000 hours (dedicated to that task), according to Malcolm Gladwell,'” Schuchardt explained. “Where are you going to get those (hours) from?”

Since the easiest place to borrow time from in daily life is the time spent consuming media, “Give up the media in order to make better media,” Schuchardt said he tells his communications students.

No matter the particulars of the pedagogical strategy, Catholics are called to be witnesses in the new digital context, said John Cavadini, who directs the McGrath Institute.

Jesus, the “Word made flesh, had no contempt for anything human, not even sinners, and so I think we have something to think about, maybe to live up to,” Cavadini said.