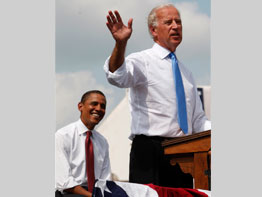 WASHINGTON – Delaware Sen. Joe Biden, announced Aug. 23 as Sen. Barack Obama’s choice as his running mate for the White House, puts on the Democratic ticket a Catholic who supports legal abortion but on other issues has been an ally for the church’s public policy interests.

Sen. Biden, 65, has come in for his share of conflicts with some in the church over his legislative support for keeping abortion legal. The National Right to Life Committee gives him a rating of 0 for his positions on select issues, including federal abortion funding and stem cell research as well as some relating to lobbying by groups like the National Right to Life Committee.

But he’s no darling of the “pro-choice” view, either, earning a score of 36 percent once from NARAL Pro-Choice America for his votes on their select issues. Sen. Obama has a score of 100 percent from NARAL.

Sen. Biden has also talked frankly about the importance of his faith in his life, maintains close ties with his Catholic high school and isn’t hesitant to show off elements of his Catholic education in the Senate.

Sen. Biden was born in Scranton, Pa., to Joseph Biden and Catherine Finnegan Biden, both of Irish-Catholic background. When young Joe was 10, the family moved to Delaware, where his father was a car salesman.

He attended Archmere Academy, a Catholic prep school in Claymont, Del., but only after his mother told him he couldn’t go into the seminary, as he wanted, until after he had some experience dating girls, his mother told a reporter in 2007.

He has maintained ties with Archmere, which sought to name a new student center building for him in 2006. The plan was scrapped after Wilmington Bishop Michael A. Saltarelli opposed it, citing Sen. Biden’s votes on abortion.

The bishop cited a 2004 statement by the U.S. bishops about Catholics in political life that says Catholic institutions “should not honor those who act in defiance of our fundamental moral principles.”

In a 2007 interview with the Christian Science Monitor, when he was a candidate for president himself, Sen. Biden said he grew up in the church at a time of great changes both in structure and in attitudes after the Second Vatican Council.

“I was raised at a time when the Catholic Church was fertile with new ideas and open discussion about some of the basic social teaching of the Catholic Church,” Biden told the Monitor. “Questioning was not criticized; it was encouraged.”

The newspaper quoted Sen. Biden’s recollection of a question to his ninth-grade theology class.

“How many of you questioned the doctrine of transubstantiation?” the teacher asked, referring to the teaching that the bread and wine change into the body and blood of Christ during Mass. No hands were raised. Finally, Sen. Biden raised his. “Well, we have one bright man, at least,” the teacher said.

Sen. Biden told the newspaper that the teacher didn’t say criticizing the church was good. “He led me to see that if you cannot defend your faith to reason, then you have a problem,” it quoted him as saying.

On issues including immigration, minimum wage, providing health care for all children and reinstating the assault weapons ban, his positions have been close to those of the church’s lobbying efforts. Sen. Biden voted to authorize the invasion of Iraq in 2002, but later became a critic of the war.

He said Sen. Biden’s commitment to his Catholicism “has inspired his advocacy on issues such as genocide, universal health care, education, worker’s rights and violence against women.”

Mr. Korzen’s statement said he’s optimistic that Biden might “help move our nation beyond the divisive, acrimonious and unproductive debate” that has come to surround the issue of abortion. He noted that Biden has said he accepts the church’s teaching that human life begins at conception and said Biden has a history of seeking practical ways of addressing abortion in ways that a broad spectrum of people can support.