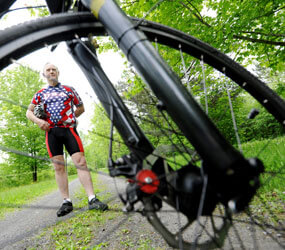 HOLLEY, N.Y. – To residents of China, Russia and a score of smaller countries, it didn’t appear that Michael Fahey was riding a bicycle built for two.

Yet it’s really the only way he ever travels. The other rider is his wife, Ruth, and her seat is in his soul.

Fahey first took to the road in earnest during Ruth’s long bout with breast cancer. Some days he’d bike for prayer and reflection; other times he’d head off to buy Ruth’s medications.

After Ruth died in September 1995 at age 48, Fahey’s mother-in-law asked what he was going to do next.

“I said, ‘I cycled 2,000 miles this summer, so I think I’ll bike across the United States,’“ Fahey recalled in an interview with the Catholic Courier, newspaper of the Rochester Diocese.

He made good on that idea the following year, beginning his cross-country trek in Newport, Ore., and ending it 35 days later at the Chesapeake Bay – traveling an average of nearly 100 miles per day.

In all, these globe-trotting treks have seen the 67-year-old Fahey rack up some 20,000 miles. He also has raised approximately $10,000 for the American Cancer Society in memory of his wife.

Fahey, a former banker who is now a real estate broker, said all funds he collects go to the cancer society because he finances his own travel expenses.

His home is dotted with mementos as well as photograph albums containing images of everything from the Eiffel Tower to a sign at the entrance of Lost Springs, Wyo. – population four.

Fahey said he prefers traveling alone. He plans his own routes as well as lodging that has included motels, hostels, the homes of kindhearted strangers, and campgrounds where he unwraps his tent and sleeping bag that make up much of the 70-pound load he carries.

Fahey observed that people of all ages and nationalities, particularly the Chinese, have extended kindness after learning about his endeavor. He’s not versed in any foreign languages, but conveys basic needed information via phrase books.

Many of his conversations have occurred in bike-repair shops where Fahey has landed because of broken spokes and tire problems. He’s on his fourth bike since beginning his extensive traveling – a Gary Fisher Utopia hybrid model.

When not off somewhere touring, Fahey enjoys biking to weekday Masses and Communion services at his parish, St. Elizabeth Ann Seton in Hamlin, at the comparatively modest distance of six to nine miles. “I try to stay in shape,” he said, adding that he conducts bicycle-safety classes as well.

Next up for Fahey is a possible trip next year along U.S. Route 1, beginning in Maine and extending 2,000 miles south to the Florida Keys; or on the Natchez Trace, a 440-mile trek through much of Tennessee and Mississippi.

He also hasn’t ruled out a tour of South America, which would be his sixth of seven continents – although he said there are no plans to complete that list by biking in Antarctica.