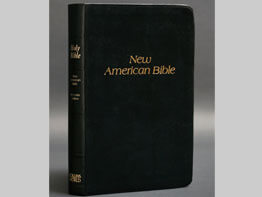 WASHINGTON – When Catholics think of the Bible, they often imagine a leather-bound book.

However, the Catholic version of the Bible is actually a library of books specifically chosen to reflect Catholic teaching, a collection that began to take shape between A.D. 50 and 400.

“In 393, at the Council of Hippo, there is a list containing 46 Old Testament and 27 New Testament works that constitute the canon adopted by the Catholic tradition,” said Benedictine Father Dale Launderville, a professor of theology at St. John’s University in Collegeville, Minn. “There was never an official decree on the books in the canon until (the Council of) Trent in 1546.”

That point is significant because the church teaches that the Holy Spirit worked through the hierarchy and the faithful to sort out which books proved vital to the faith of the communities, Father Launderville said in an interview with Catholic News Service.

The books stood the test of time and came to be regarded as fundamental tools in identifying Catholics as a faith community, he said.

“The Bible contains the records of 4,000 years of Judeo-Christian culture,” said Franciscan Father Jack Wintz, a well-known Catholic writer, who has served in various editorial roles at the St. Anthony Messenger and Catholic Update.

“Even before writing materials were invented, the many stories included in our Bible were handed down from generation to generation by word of mouth. We call this ‘oral tradition.’ As time passed, the ancient Israelites began to commit their community’s stories to writing,” he said.

The earliest written stories were about the deeds of kings and by the 10th century B.C. they were written as lyrics to songs, Father Wintz said.

After the Reformation established the Protestant movement throughout Europe in the 1500s, Protestants of all denominations instituted their own Bible, or collection of writings.

“Basically, the difference between a ‘Catholic’ and a ‘Protestant’ Bible is limited to the contents of the Old Testament,” said Father Murray Watson, a biblical scholar at St. Peter’s Seminary in London, Ontario. “Catholic Bibles contain seven books which traditional Protestant Bibles do not.”

He said those books are “Tobit, Judith, Wisdom, Sirach – also called Ecclestiasticus – Baruch, 1 Maccabees, 2 Maccabees. Catholics use versions of two Old Testament books, Daniel and Esther, which are considerably longer than the version in a standard Protestant Bible. Most Eastern Orthodox churches use a longer one, similar to the Catholic Old Testament, and some of them actually add several other books as well.”

These seven books are called “apocryphal,” or hidden, by most Protestants, who don’t consider them “as inspired,” and do not include them in their Bibles, Father Watson said.

However, Catholics do consider these books inspired, and refer to them as “deuterocanonical,” or belonging to a “second list of canonical/approved books,” since their status was debated longer than most other books, which were on the “first list,” he said.

The difference is rooted in the fact that well before the time of Jesus there were two different versions of the Jewish Bible in circulation and used by Jews in different parts of the Mediterranean, Father Watson said.

“One of them seems to have been in Hebrew/Aramaic, and was used almost exclusively in the Holy Land, whereas another version translated into Greek was used by most of the Jews of the Diaspora, the Jewish community outside of the Holy Land, whose daily language of communication was Greek,” he said.

“The Greek translation, which was called the Septuagint, had a number of books in it that were not contained in the Hebrew/Aramaic version. However, since the vast majority of Jews at that time lived outside the Holy Land, the version they were most familiar with was the Greek version,” he said.

Church beliefs and practices under attack by Protestant reformers included purgatory, judgment, devotion to Mary, the intercession of the saints, most of the sacraments, the mandatory celibacy requirement for its clergy, and the authority of the pope. So, they needed a Bible with Scriptures that would reflect their traditions, Father Watson said.

Over time, the Catholic hierarchy, too, chose Scriptures that best reflected their interpretation of the true word of God.

Though the Catholic Bible began to take shape centuries earlier, the foundation became more concrete during the Council of Rome in 382, when the church decided what it should accept and what it should reject.

This body determined and Pope Damasus I decreed the order of the Old Testament should begin with the book of Genesis, and include Exodus, Leviticus, Numbers, Deuteronomy, Joshua (Son of) Nave, Judges, Ruth, Paralipomenon (1 and 2 Chronicles), Psalms, Proverbs, Ecclesiastes, Canticle of Canticles (Song of Songs), Wisdom, and Ecclesiastcus.

The order of the historical books was proclaimed to start with Job, followed by Tobit, two books of Esdras (Ezra and Nehemiah), Esther, Judith and two books of Maccabees.

During the Council of Hippo in 393, it was decided that besides the canonical Scriptures nothing under the name of divine Scripture should be read in church.

Over the years other books were added to the canon and deleted, and in 408 Pope Innocent I issued an opinion that resulted in the Bible used by Catholics today, which also includes fives books of Solomon and 16 books from the prophets.

“For Catholics, the Bible and the church are two interrelated expressions of God’s communication to God’s people, and they depend on each other,” Father Watson said.

“Today, these differences are largely being overcome,” he continued, “since more and more editions of the Bible are being published in ‘ecumenical editions,’ which incorporate all the books sacred to Catholic, Protestant and Orthodox Christians, while placing the deuterocanonicals in a separate section between the Old and New Testaments, thus allowing people to choose whether or not they wish to read them.”

In addition, almost every major English translation of the Bible today is produced by an interdenominational team of scholars, which includes Catholic, Protestant, Orthodox and, in most cases, Jewish members as well, he said.

“In terms of ‘Catholic’ Bibles today, almost any mainstream Bible translation is appropriate for Catholics to read and study, provided, of course, it includes the deuterocanonical books,” Father Watson said.

“Among the more popular Bible versions for Catholics would be the New American Bible, the New Jerusalem Bible and the New Revised Standard Bible. Many Catholics also read the Good News Bible, which is published by the United Bible Societies, and today has a Catholic version available,” he said.